Why the West Needs More Fascism (no, really)

The weak and the botched shall perish: first principle of our charity. And one should help them to it. —Nietzsche, from The Antichrist

First: I am not a Fascist. Seriously. No, seriously. Well, all right, from the perspective of indoctrinated social justice warriors I am one, because for them anyone to the right of Jill Stein is a fascist. But I’m not a real fascist. About a year ago I took the Political Compass test (at politicalcompass.org), and according to it I’m at almost dead center between left and right, even very slightly left of center, which I suppose is good for a Buddhist—middle path between extremes, and all that. On the big certificate featuring famous politicians, the politician I come closest to, of all people, is Nelson Mandela—which is kind of unfortunate, considering that Mandela was a terrorist. (Maybe you didn’t know that? The whole time he was in prison, Amnesty International refused to take his case because he was a known terrorist legally arrested and fairly tried in a court of law, and he even pled guilty to more than 150 acts of public violence, including the planting of bombs in public buildings and on public roads. He was offered his freedom from prison if only he would renounce acts of terrorism, which he refused to do.) Second closest to me on the map was Adam Smith. Then again, I am rather skeptical of the Political Compass’s judgements, considering that they put Barack Obama well to the political right, farther right even than Winston Churchill. He was neck and neck with Augusto Pinochet as a right-winger. If I’m farther to the left than Obama even, the Progressive Messiah, then gawd help me.

That said, not only am I a centrist personally, but I am a centrist with regard to the Big Picture, which includes all other persons. As I mentioned in the concluding post to my previous blog, I have somehow adopted a position which in the old Dungeons and Dragons game would be called “lawful neutral”: in other words, I feel compelled to fight for the underdog against the prevailing side, for the sake of maintaining some semblance of cosmic balance. And if for whatever reason the side I’m fighting for actually begins to gain the upper hand, then I switch sides—again, to help maintain cosmic balance, to keep things centered. (I could never, ever endorse the new feminized PC left however—it’s just too freaking insane—if the far right starts winning big I might have to become some sort of Gandhi-style agrarian communalist…or more likely I’d just go back to limiting my social concerns to reclusive Buddhist monasticism.) Anyhow, I realize that my being a centrist just isn’t good enough when western civilization in general is teetering ominously to the left, and is in danger of flipping completely upside down.

So, going with this boat metaphor, when a great many fools lean way over to the left (that’s “port” in boat talk), the only thing to do to prevent the boat from capsizing, until the aforementioned fools stop their leaning and tipping of the boat, is for lots of other people to lean way, way over to the right (“starboard”), to counterbalance the vessel. To try to counterbalance extreme leftism with centrism, let alone moderate liberalism, is a fool’s task, especially since the “center” itself is veering drunkenly leftwards; centrism is appropriate when some semblance of stable equilibrium has been achieved, not for times when the freaking boat is about to flip upside down and sink. Consequently, ergo, what the western political scene desperately needs is some more far-right political philosophy, or in other words, more fascism. 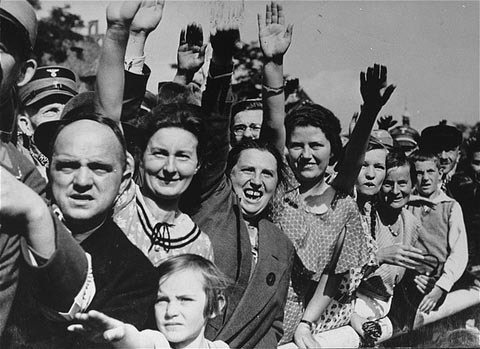 I suppose I should explain what I mean by “fascism.” I don’t mean genocide, or rampant militarism, or necessarily even institutionalized racism. What I do mean is far right political ideas to balance out the insanity of the new left, even though these right-wing ideas may be just as bad overall. There should be more endorsement of the complete eradication of a socialized welfare state, and of affirmative action too of course; there should be greater emphasis on patriotic nationalism and pride in one’s cultural heritage, even for whites; there should be glorification of the strong and successful instead of the weak and dysfunctional; and there should be a frank acknowledgement of the inevitability of inequality, and thus endorsement of class stratification within society (even though the strata might have permeable borders). One should remember that the extreme left, if it ever gains power, will be the moral equivalent of fascism anyway, perpetrating the same atrocities, building the same gulags, abolishing the same rights and freedoms, equally destroying democratic government and true justice. In a feminized form radical leftism may prove weaker and more gentle in its oppression than the leftist monstrosities of the 20th century, but by the same feminist token it will be less pragmatic in dealing with empirical reality, less stable, and more likely to collapse into anarchy, chaos, and flames, as is already beginning to happen in oh-so-progressive feminized western Europe. On the other hand, the progressive utopian ideal may eventually be taken over by ruthless sharks intent on their own power, as is what usually happens when progressive, utopian ideals are put into practice on a large scale.

The new philosophical fascism could even dodge the standard anti-fascist slur of racism to some degree by going with the assumption that if one race truly is superior to others, then a level playing field would be sufficient to keep the lesser races in their place. Thus there would be no real need for discrimination at all (although it would presumably still be optional in theory—after all, we are talking about fascism here). But let the theory be extreme, since its purpose would be to counterbalance an opposite and equally odious extreme.

True, in order to be hard right there would have to be some stratification of society—pure, absolute equality of everyone is a utopian leftist ideal, even THE leftist ideal. But class stratification of rightist systems is no more outrageous than the artificial Procrustean bed of reverse discrimination required to maintain the illusion that everyone is the same. The hard left is no less abominable in its perceived need to artificially eliminate real differences among people and groups of people.

The foolish mass hysteria of the feminized PC left is creating a dysfunctional civilization, a human society totally out of balance to the point of being literally suicidal. The old-fashioned way, in addition to being more or less fascistic (and practically all great civilizations of the past would be called fascistic by postmodern standards), was more natural, more in accordance with inherent human nature, and also more balanced, with men leading in society and women moderating the excesses of men who love and respect them, as well as instilling in children, the next generation, their first foundations of morality and uprightness. Behold western Europe now as it tries to abolish (white) masculinity and consequently kills itself. What Europe needs more than anything, if it is not to degenerate into a third-world Islamist caliphate, is some good old-fashioned fascism: maybe in the form of regimented youth organizations promoting physical fitness, national and even racial pride, honor, courage, and a willingness and ability to fight for one’s own homeland—not only against Islamists and Shariah law but against idiot feminists trying to sacrifice western civilization on the altar of political correctness hysteria. This may sound like warmongering; but war is simply inevitable now, unless all Europeans have become so emasculated and “cucked” that they’re willing to be forcibly converted to Islam, enslaved, or else slaughtered like sheep. So-called progressivism has already driven Europe past the point of no return.

The dangerous trick would be to encourage hard-right politics only to the extent that it serves to cancel out the feminized PC left, along with the anti-Fascists, leaving a more centrist, more balanced, more sane system at the helm. But it seems practically unavoidable now. These are desperate times.

Even if the hard right were to prevail, which could happen considering that they’d be up against decadent eunuchs, still, a culture of live lions is arguably preferable to one of dead sheep. And if, as is more likely, the whole mass of turmoil results in a compromise, then it will be a compromise resulting in a position towards the center, not a midpoint between the far left and the moderate left, all set up for the next extremist lurch leftwards.

Again, I am certainly not suggesting that what we need is genocidal ethnic cleansing, not even of whites, nor militaristic imperialism—just some strong ideological and practical counterweights to keep the boat on an even keel. It is damn unlikely that western society in general will start leaning hard right anytime soon; but even if it does there’s the consolation that it won’t be any worse than the opposite, leftist extreme. And at least right-wingers have enough sense not to try deliberately to sink the fucking boat.

The insanity of the new left is such that it has brought about an amazing paradox: The most fascistic, right-wing ideology with any real political power in the west nowadays is Islamism, with which the far left has actually allied itself. This results in the two opposite extremes being on the same goddam side! What will be left after the inevitable matter/antimatter explosion occurs is anyone’s guess. But I’m guessing that, after the Islamists inevitably cannibalize their foolish, ultra-decadent benefactresses, they’ll be up against a grim remnant of western civilization driven rightwards through sheer desperation. And whichever side wins, the far right will prevail after all. At least in Europe.