Donald J. Trump: Savior of Western Civilization? (Ha, I Love This) part 1 of 2

All those that he would cherish shrink from him with fear,
And some that waxen bold by his tranquility,
Endeavor hard some grievance from his heart to tear,
And make on him the trial of their ferocity.
—Baudelaire

(I started writing this post a few months ago. Then Mr. Trump signed the abominable omnibus bill, with runaway government spending and almost no funding for his “big, beautiful wall,” resulting in the swamp creatures of the Establishment grinning and winking and rubbing their hands with glee at how they had outwitted the author of The Art of the Deal; and I became disheartened and set the document aside. I’m feeling better now, so I continue. Those of you who don’t like Trump may at least get some insight into the attitudes and feelings of Trump supporters, if you have the stomach for that.)

Quite some time ago, shortly after starting up this here blog, I compiled a list of reasons why the new “progressive” left is beginning to falter in its grand enterprise of taking over western civilization. I could think of at least 25 major reasons, with plenty of lesser ones acknowledged but not included on this list (like lingering, critical aftereffects of Gamergate, and the fact that the new left always, always foolishly take whatever bait is set out for them). But, somehow I lost interest and shelved it, still unfinished, in the digital guts of this computer, where it remains. This post emphasizes a big one—at least one, maybe more—but from a somewhat different perspective. The big reason for floundering leftists isn’t US President Donald Trump in and of himself, nor even the sum total of his policies and actions thus far as President, but more along the lines of how President Trump, as the unexpected, uncouth leader of a politically incorrect new populist movement, is inspiring the new left to self-destruct. Come to think of it, this one may not even be on my old list of 25, despite its profound importance. I guess I overlooked it because it’s coming from a different angle—a failure that, rather than being a straightforward organic weakness, is the side effect of a weakness being elicited from them. In a sense, it is a consequence of the new left’s hysterical irrationality—which is definitely on the list.

Anyway, as I’ve mentioned before, I like reading the comments sections to articles and YouTube videos (why I haven’t switched to Bitchute by now I can’t say exactly), and sometimes they are more enlightening than whatever it is they’re commenting on. One gets to see how the common person feels at any rate. So not long ago beneath an article in Breitbart on how Mr. Trump badmouthed a prominent “journalist,” or rather left-wing propagandist, at one of his rallies, I found this little exchange. The section I include here begins with a rather mild-mannered leftist troll responding to someone, which elicits a rather impassioned response from someone else.

Marilyn Cook → HalfMoments
Halfmoments. You really think that insulting people and calling them names is the way to deal with people. I dare you to talk face to face with people the way trump does. If you do try it you will either be laying flat on your back or you will be going to meet your maker. Do you want your children to talk to others like trump does?
Appreciate → Marilyn Cook
That wins the Hypocritical Post of the Day Award. Congratulations, Marilyn! Leftwingers have called YOUR President, President Trump, AND his supporters every vile name in the book. Regular Americans see you as the Party of Hate and for good reason. Remember when soetoro [i.e., Obama] won, twice, and you, Marilyn, wagged your ugly finger in every conservative’s face and said “I don’t care how you feel about him but he IS the president and you WILL show him and the office respect.” Do you remember that?

As a woman, I value the truth. You, clearly, do not. You STILL cannot handle that you lost an election. Grow up. And trust me, NO ONE believes in this “new moral high ground” you hate-filled, antifa-supporting, violent and self-loathing dims [that is, Democrats] are now pretending to own. The Hypokrat Party is now reviled by every last American citizen but the brainwashed. Get lost, marilyn.

Appreciate → Dekai Kuma 🕇 Patriot
Thank you. They really are the most dishonest and hypocritical people in America and normal, sane Americans are fed up!

Dekai Kuma 🕇 Patriot → Appreciate
You're absolutely right!
It's amazing how you can feel the change in the air, a tidal wave of reason finally coming over our country, thanks mostly to Mr. Trump. He made them collectively lose their minds and at the same time show their true intentions for our great nation.

Unquote. I include most of this simply because the exchange demonstrates a very interesting social phenomenon or two, and also demonstrates the high feelings of non-leftists throughout the USA with regard to the pandemic of PC hysteria and “Trump Derangement Syndrome”; but the last comment by Dekai Kuma is really where the climax of my argument begins. But first, some preliminaries.

Mr. Trump is dealing a major blow to the new left by his obvious, straightforward undoing of Mr. Obama’s (and to some degree even Bush II’s) “progressive” agenda. Just to list off a few of his works which immediately come to mind, he pulled away from the TPP and other economic deals detrimental to US interests, has placed a strong conservative constitutionalist on the US Supreme Court, took steps to decentralize the (overwhelmingly leftist and degenerating) US educational system, strengthened the military (including pulling back on Mr. Obama’s absurd PC stance on recruiting transsexuals), has taken a much firmer position on enforcement of immigration laws (regarding legal immigrants as well as illegal ones), has encouraged domestic industry and commerce, partly through deregulation, thereby lowering unemployment rates and people’s dependence on the welfare state, has gotten tough with aggressive nations which Mr. Obama rather fecklessly appeased (including California!), refused to enter the ineffective virtue-signaling money pit of the Paris Accords which Obama favored and which has accomplished approximately zero, and is motivating an overhaul of a corrupt, politicized, and weaponized “deep state” bureaucracy which includes the FBI, CIA, and Department of Justice—again, just to name a few of Trump’s accomplishments thus far. 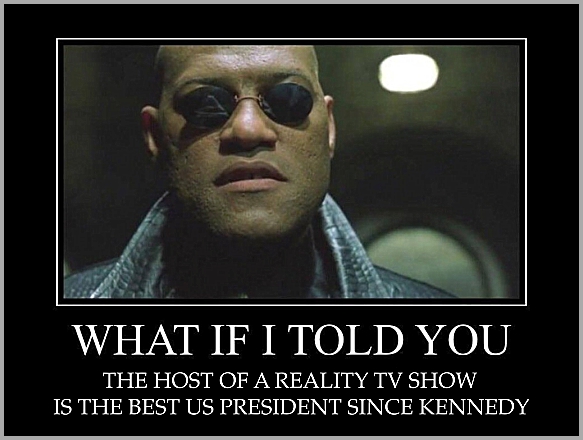 Another powerful blow he has struck against creeping “progressive” socialism is that part of his new tax legislation, effective since January 2018, ordering that state income taxes over $12,000 per year are not deductible from federal income tax. This hits hardest Democrat-dominated states with the highest taxation, such as California and New York, which greatly weakens the strength of incipient socialism in the USA.

So in direct, obvious ways Mr. Trump is undoing the agenda of the “progressives” (as though decline and fall were progress) which Obama promoted, and which Clinton would also have promoted—and probably whatever Republican “conservative” member of the globalist Uniparty swamp also would have promoted to some degree, if a Republican other than Trump had won the US presidential election. He has thrown a wrench into the mechanical workings of the new world order—a crypto-movement working towards ending national and also individual sovereignty for the sake of a more or less socialist world superstate, for our own good of course, whether we like it or not.

But possibly more important than all this, Mr. Trump is setting a politically incorrect example, serving as a political catalyst, the tip of the spear for a conservative and libertarian counteroffensive in the culture war, for the growing resistance movement against PC and “progressive” propaganda and indoctrination, not only in the USA but throughout the western world. Although constantly accused of being a liar and worse, Mr. Trump is continually broadcasting home truths about the corruption of the system, calling out the Establishment swamp and the propagandist media’s duplicity, and promoting populism, as well as national and cultural pride and integrity, as in the following quote from his famous speech in Warsaw, Poland:

We write symphonies. We pursue innovation. We celebrate our ancient heroes, embrace our timeless traditions and customs, and always seek to explore and discover brand-new frontiers. We reward brilliance. We strive for excellence, and cherish inspiring works of art that honor God. We treasure the rule of law and protect the right to free speech and free expression. We empower women as pillars of our society and of our success. We put faith and family, not government and bureaucracy, at the centre of our lives. And we debate everything. We challenge everything.

In the words of James Delingpole, a journalist (and climate change denier) on Breitbart, with regard to Trump,

No other leader anywhere in the Western world—certainly not Angela Merkel or the insipid Theresa May—speaks up for our values (the wisdom of the Ancients, infused with Judaeo-Christian morality, filtered through the skepticism and scientific experiment of the Enlightenment, made prosperous by global trade and the Industrial Revolution) in such a forthright and unapologetic way.

Mr. Trump is providing encouragement to the populist movements of Europe in their resistance to the destruction of ethnic identity, national sovereignty, and the peace and safety of their communities by newly concocted “European values,” that is, neo-Marxist and globalist values. Europeans dismayed at seeing their national heritage reviled and attacked by foreign migrants and their own governments and media, but intimidated into conformity through fear of being persecuted as “racists” or “fascists” or whatever, are looking to the United States as an inspiration: if the citizens of the world’s leading superpower can resist the hysteria of a seemingly universal suicide cult, so can they. The political left and their quisling allies among “conservatives” can’t stand all this. Donald Trump has done more than any other person to break the momentum of the current endgame for socialized globalism gaining control of the western world.

But possibly most important of all, President Trump is driving the political left (and their turncoat allies) into such a frenzy of hatred and desperation that they have become quite reckless, and careless of exposing themselves. John Hinderaker, a contributor to the conservative blog Power Line, recently observed,

I’ve been wondering whether a backlash would develop against the Democrats’ crazed, ceaseless attacks on President Trump. No one has ever seen anything like it: the ridiculous smears, the nightly barrage of television “comedy,” over-the-top attacks by former government officials like John Brennan and James Comey, endless investigations into nothing in particular, calls for impeachment (grounds? who needs grounds?), absurd accusations of “treason,” and so on. It is unprecedented in American history, and maybe voters are starting to think the Democrats have gone too far….

The number of voters who strongly approve of the president is rising, while the number who strongly disapprove is falling. This seems paradoxical in light of the insane hatred that is unleashed against President Trump on a daily basis. I suspect that part of the explanation, at least, is that some voters have figured out that the Democrats are crazed and are reacting negatively to their extreme tactics.

The Democrats need to get a grip, but instead they seem to be falling ever deeper into blind rage. 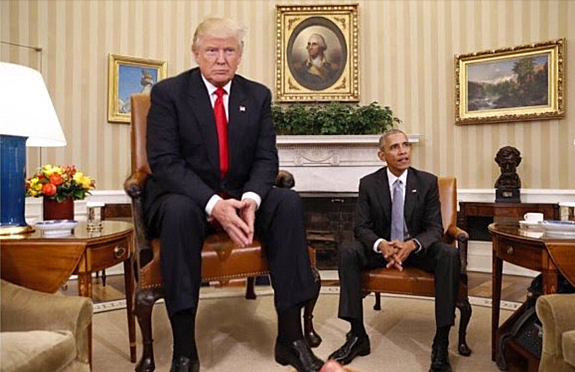