On “Primitive” Humans, Ancient and Modern (Part 1: Not Primitive, Archaic)


Most educated people are aware that we're the outcome of nearly 4 billion years of Darwinian selection, but many tend to think that humans are somehow the culmination. Our sun, however, is less than halfway through its lifespan. It will not be humans who watch the sun's demise, 6 billion years from now. Any creatures that then exist will be as different from us as we are from bacteria or amoebae. —Sir Martin Rees

The process of organic evolution, so say the scientists, is essentially this: a population of organisms adapts to its environment over time, generation by generation. Darwinian natural selection is based upon a few simple and fairly obvious principles: 1. more offspring (animals, plants, bacteria, whatever) are born than will survive to reproduce; 2. offspring, due to sexual mixing of genetic material and random mutations, will differ from their parents to some degree, and will differ from each other (which is the primary purpose of sex to begin with); 3. those organisms which are best suited to their environment are most likely to survive to reproduce; and 4. the offspring they produce will inherit traits from their parents, to be passed on to their own offspring, if they are successful enough in life to reproduce. None of these principles are particularly controversial, and all of them combined result in a population evolving over time, as it adapts to its environment—and the environment itself may also be changing, due to climate changes, introductions and extinctions in the flora and fauna, etc. Nowadays only religious fundamentalists insisting upon a prescientific worldview, plus those who are ignorant of western science, do not accept some variation on Darwinian evolutionary theory.

One point that is often ignored is that all organisms are equally evolved; some are not more evolved than others. This is because all life on this planet is the end product of the same billions of years of evolution. Some hereditary lines have changed more than others, but still, those few principles have applied to all living populations since living populations began. Populations in a very changeable or otherwise challenging environment may change more than others living in a stable environment, but all are gravitating toward the (presumably impossible) goal of perfect adaptation to their environment. Those that fail in this become extinct.

Largely because of this, biologists usually don’t use the terms “primitive” and “advanced” when discussing groups of organisms within the context of evolution. When I was a student the preferred terms were “archaic” and “derived”—that is, having changed less or more from an ancestral type over time.

Another point that is often ignored is that evolution is not necessarily in the direction of greater complexity, much less greater intelligence in animal species. Some parasites, for example, evolve in the direction of greater simplicity; fleas, for example, evolved from winged insects, but over the course of adapting to a lifestyle of living on hosts’ bodies and becoming resistant to damage from scratching claws, they lost the wings as an adaptation. Some parasitic worms have completely lost the digestive organs of their distant ancestors, as they are soaking in digested food and can simply absorb it through their outer surface.

Another case in point is Burmese dogs. Possibly half of Burmese dogs, maybe more, do not live long enough to reproduce their genetic material. (A four-year-old dog in Burma is a relatively old dog.) Consequently, one would think that survival of the fittest and evolutionary adaptation were still going strong in the Burmese dog population. But at the same time, lots of Burmese dogs are amazingly, brainlessly stupid. I used to wonder about this. One would assume that if natural selection is still a major factor in conditioning the traits of dogs in Burma, then so many of them wouldn’t be so abysmally stupid, so stupid that they can’t seem to figure out even when mealtime is. Then I read in a book that normal brain tissue uses as much energy as does strenuously exercising muscle tissue; our brain burns up more calories than any other part of our body. Then I understood: in an environment where starvation and malnutrition are major causes of death, it pays to have as little fuel-inefficient brain tissue as possible. Stupidity can actually have survival value, at least in Southeast Asian village dogs.

Consequent to all this, “primitive”/“advanced” is considered to be a misleading dichotomy, implying a state of being less evolved or more evolved, or even of inferiority and superiority. But with regard to the latter pair of opposites, unless the inferiority and superiority are defined within some explicit context (like superiority in strength or speed, or at competing for food or territory or mates or some such), the distinction would be unscientific, and pretty much nonsensical. “Inferior” and “superior,” and to some degree “primitive” and “advanced,” are mere subjective value judgements unless there is some explicit context defining in what way an organism or whatever is better or worse than another.

It is a common unscientific myth that humans are the most highly evolved of all organisms—or worse yet, that evolution has been somehow working towards the production of humans as some kind of final goal, and has now run its course after reaching the glorious zenith of humanity. This is plain hogwash. Biologically speaking, human beings are actually archaic in some respects, compared with other mammals. For example, our teeth conform to a relatively “primitive” design, and we still have the archaic, original mammalian number of fingers and toes. The order of Primates, to which we belong, is on a direct line of succession from the Insectivora, such as shrews, the most archaic of living placental mammals; strangely, we are more closely related to bats (also directly descended from insectivores) than we are to most other orders of mammals. From an evolutionary perspective, a horse or a whale is more derived or “advanced” than we are in some respects. For that matter, birds have much more efficient lungs and excretory systems than we mammals have: a bird’s lungs are designed so that the air passes through them in the same direction regardless of whether the bird is inhaling or exhaling; and a bird’s “urine” is semisolid, allowing a bird to get by on less water than we require.

The whole situation can be rather counterintuitive. People may assume that, since amphibians evolved from lungfishes, and reptiles from amphibians, and mammals from reptiles, a lungfish would be a highly evolved, “derived” sort of fish, almost at the “next stage of evolution”; but lungs in a fish are actually relatively primitive, or, rather, archaic. A sturgeon is a “primitive” bony fish, yet it has a functional lung and can breathe air. Same goes for lungfishes themselves. Most bony fishes possess a swim bladder as a buoyancy regulator, which is in fact evolved from an ancestral lung; they lost the lung as an evolutionary adaptation. (This is evidence that bony fishes, as opposed to cartilaginous ones like sharks and rays, evolved in fresh water prone to going stagnant and anoxic, like ponds or swamps, where an ability to breathe air would be of great survival value…but I digress.)

Before moving on to focus exclusively on humans, let’s consider dogs again. Pretty obviously, different breeds of dog have different physical and psychological characteristics. As Darwin wrote in The Descent of Man, “in regard to mental qualities, their transmission is manifest in our dogs, horses and other domestic animals. Besides special tastes and habits, general intelligence, courage, bad and good tempers. etc., are certainly transmitted.” It is well known, for example, that a golden retriever is more likely to be friendly with children than a Rottweiler; Great Danes do not make the best guard dogs, regardless of their imposing size, because they tend not to be particularly aggressive; Scottish terriers, more than most breeds, tend to devote themselves to a single human and be one-person dogs; and sheep dogs (especially if they are still used to herd sheep and haven’t been turned into useless display animals by kennel club fashions, as is the case with some collies) tend to be relatively very intelligent, whereas fighting dogs like Airedales are notoriously brainless. Yet it would be a mistake to assume that a German shepherd is more “advanced” or “derived” than an Airedale. In fact domesticated animals tend to be less intelligent, with a smaller brain, than the wild types from which they have evolved—dogs, pigs, chickens, rats, etc. Also it should be borne in mind that different breeds of dog are genetically closer to each other than are different races of human, despite obvious physical differences. It wasn’t until relatively recently (reportedly in 2003) that scientists were able to detect any genetic differences at all between different breeds of domestic dog.

But when it comes to human beings, the academic fashion, following the ideology of the new political left, has retrogressed back to the science denial of religious fundamentalists; humans, aside from some superficial and irrelevant physical traits, simply cannot have continued to evolve after reaching the stage of Homo sapiens, especially not psychologically! It is not controversial that various populations in various parts of the world adapted to various kinds of environment, and thus necessarily evolved in somewhat different directions—but no! It can’t be, because the feelings-driven ideology afflicting western culture at present demands political fairy tales so that everyone can be completely equal and white males can be blamed for all inequality of outcome in interracial interactions, and, in short, for almost everything bad in society.

Nevertheless, different races of H. sapiens do differ both physically and psychologically, for the simple reason that their ancestors adapted to different environments…an idea that will be derived in the next post. 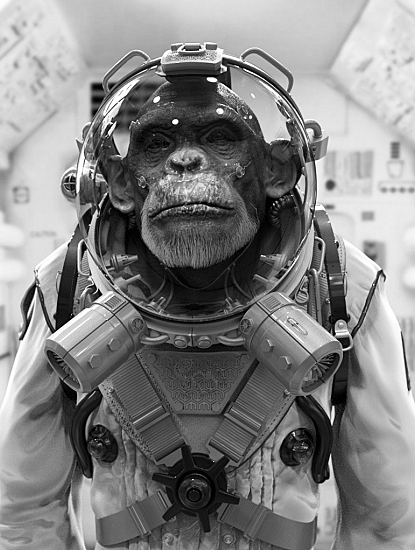