I have continued to be interviewed by Herr Brian Ruhe for his video channel once per week, with multiple segments posted from each interview. I would have said his YouTube channel, but a few weeks ago the YouTube thought police purged almost all of his content from the site, including our interviews. This was probably not because of any of the content of our discussions (though some of it could be politically incorrect enough to elicit a few red flags), but more because of his alt-right politics, rampant rejection of official narratives, etc. But anyhow, his stuff is still on Bitchute, to which site I am gradually transitioning, since YouTube appears to be moving towards 1984 mode with regard to unpersoning content creators guilty of non-leftist wrongthink. Even so, I have posted a few of these videos, thus far, on my old YouTube channel, which channel I had pretty much ignored for several years.

I don’t edit, produce, or name these videos, except for the titles to the videos I post onto my own YouTube channel; and if I did provide the thumbnails etc. I might indulge in a bit more subtlety at times, but never mind. For the most part I stand by all of this, even though when talking off the cuff I occasionally misspeak, or omit to say something important, and may occasionally get a little too “edgy” in my social critiques to suit even nonconformist western Buddhists. But that’s all OK too. I consider much of the stuff below to be important, and potentially even helpful. I’m seriously considering getting a Styxhexenhammer mug and a spoon for future videos.

Social Justice vs. Actual Dharma, or in other words, leftist sentiment vs. Buddhist ethics (39:50)
Bitchute: https://www.bitchute.com/video/FMLWOFeB2Uqu/

On the Taungpulu Forest Tradition of Burma, and on cave-dwelling and dhutanga ascetic practices in general (28:13)
Bitchute: https://www.bitchute.com/video/0LTuHsE31XM8/

On “ascension” and other alleged mass shifts of consciousness, and also the idea of group karma (27:27)
Bitchute: https://www.bitchute.com/video/S34OOKN4wOI/

On the Buddhist attitude towards Free Will (39:23)
YouTube: https://www.youtube.com/watch?v=NcKVlMKp9xY&t=253s
Bitchute: https://www.bitchute.com/video/c71-UXlKvJs/

On the recent YouTube Purge, on the “Establishment’s” Control of the Narrative, and on the Cultural Civil Cold War Currently Raging in the West (with a little shilling for Minds.com and President Donald Trump) (41:29)
Bitchute: https://www.bitchute.com/video/rusE8D4kU4yl/

Theravada and the early origins of Mahayana (in which I almost completely forget to talk about the Bodhisattva concept) (1:13:33)
Bitchute: https://www.bitchute.com/video/p6WP4iGmPX8y/

On History, Propaganda, and Control of the Narrative (including Brian’s theories on how modern archeology is wrong, and that white people lived on this planet for possibly millions of years—this was kind of a frustrating experience for me) (44:04)
Bitchute: https://www.bitchute.com/video/02eF1t0g99jI/

On Alt-Buddhism, and what a non-“progressive” western Buddhism could or should be like (51:25)
Bitchute: https://www.bitchute.com/video/MbTGJxEagNgO/

On “The Time I Was Attacked by Ogres,” with Otto Excelsior
https://www.bitchute.com/video/bN8JSat0Skjr/

Also, a re-posting to YouTube of the video on Why Western Buddhists Usually Fail
https://www.youtube.com/watch?v=BpAYQdk10vU&t=14s 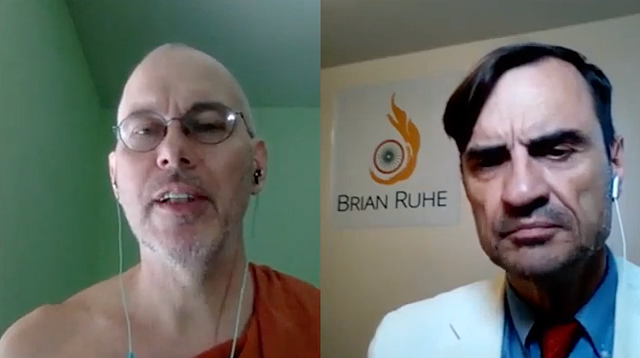