On the Causes of Antisemitism (part 2: Recently)


Although it is difficult to assess the effect of works like The Authoritarian Personality on gentile culture, there can be little question that the thrust of the radical critique of gentile culture in this work, as well as other works inspired by psychoanalysis and its derivatives, was to pathologize high-investment parenting and upward social mobility, as well as pride in family, religion, and country, among gentiles. Certainly many of the central attitudes of the largely successful 1960s countercultural revolution find expression in The Authoritarian Personality, including idealizing rebellion against parents, low-investment sexual relationships, and scorn for upward social mobility, social status, family pride, the Christian religion, and patriotism.  —Kevin MacDonald, in The Culture of Critique, in a section entitled “The Influence of the Frankfurt School”

By the mid 20th century, after European and American Jews stopped being repressed socially and to some degree economically, for example by being prohibited from attending secular or Christian universities, and were allowed to participate more fully in western, more or less Christian society, they began exercising their cleverness and economic success as a means of manipulating western civilization in various ways, to promote Jewish interests. Some of the most powerful, for example the notorious Rothschilds, were evidently engaged in this much earlier. Partly out of tribalistic self-interest, ethnocentric competition, and sheer desire for money, but also out of an ironic attempt to eradicate antisemitism, Jewish intellectuals in various fields, backed by largely Jewish organizations and movements, established the so-called “Culture of Critique,” emphasizing the more negative, darker aspects of western civilization, and attempting to destabilize and undermine it. Old-school Marxism, Freudian psychoanalysis, Boasian anthropology, the Frankfurt School brand of neo-Marxism, etc., were profoundly influenced by Jewish sentiments of alienation and the blaming of mainstream western culture for most of the pathology and dysfunction to be found in the world. As can be seen in the historical record, many of the destabilizing, radical aspects of the new left, including multiculturalism and open borders, intersectionality, feminism, grievance culture in general, gay and transsexual rights, the vilification of masculinity and the traditional family, scorn for patriotism, Christianity, and traditional Christian values, and promotion of unrestrained sexuality have been strongly endorsed by groups in which Jewish people predominate, many of them in academia. It is relatively well-known at this point that Jews have an inordinate amount of influence in the mass media and in higher education in the west, and have exploited this to control a narrative more advantageous to ethnocentric Jewish interests than to western civilization as a whole. Pretty much the entire radical “progressive” movement which has thrown western civilization into a kind of social uproar has been generated, at least in part, by deep-rooted Jewish feelings of alienation and resentment against a civilization that has mistreated them, the Chosen People of God.

It is interesting that, as was mentioned above, one of the main reasons for this agenda of undermining western civilization is a sincere desire to eradicate antisemitism. The more multicultural a society is, for example, the more accepting of minorities—like Jews—it is likely to be. Also the less nationalistic and patriotic and patriarchal a society is, the less likely that anything resembling German National Socialism or any other form of non-Jewish ethnic nationalism will arise to endanger the Jews. The really ironic thing is that these very efforts to undermine antisemitism by undermining western liberal “Enlightenment” civilization may be starting to backfire horribly, because more and more people are becoming aware of this situation. And they are becoming aware of it because the influential Hebrews doing their best to manipulate civilization failed to foresee the pervasive power of the Internet.

Ethnocentric Jewish magnates strove for several decades to gain control over the mass media in America especially, not only to make a mountain of money but to guide the thoughts and attitudes of the goyim away from anything averse to Jewish interests. Now their efforts to prevent antisemitism, as well as to prevent a strong, healthy, potentially dangerous Christian society, are being increasingly exposed, thereby resulting in increasing antisemitism. Even most science fiction authors failed to predict the phenomenon of the Internet; and now powerful Jewish activists (whether they consciously identify as devout Jews or not is irrelevant, as Judaism is a race as well as a religion) are scrambling to gain control of the Internet as well. The recent crackdowns on “hate speech” on Facebook, and to a lesser degree the refusal to sell certain books by Amazon.com (including The Culture of Critique), attempts of mainstream media to shut down alternative media competitors, and Soros-funded groups involved in increasing censorship, are evidence of this. But the genie is out of the bottle, and it’s unlikely that it will be replaced by any acceptable means.

These attempts to eliminate antisemitism by weakening European Christian civilization and turning it into a multicultural, multiracial mongrel society (while Jews themselves remain strongly ethnocentric and tribalistic) have never been a total secret, as many, especially in academia, have been quite outspoken in their agenda of weakening or even eradicating the white race. This has been especially evident since the advent of Twitter and other social media. Jewish racial supremacism, or just a desire to weaken Christian civilization, which occasionally rises to the level of sneering contempt, is generating a resurgence of medieval-style resentment of Jewish outsiders. It is as though the radical progressive, globalist, and largely Jewish endgame is afoot, and has come out into the open, and it may be all or nothing at this point, with little hope for compromise.

Summing up the situation I can say that a relatively small minority of western Jews (i.e., nowhere near to all western Jews) are literally attempting now to destroy traditional European cultures, and have met with a fair amount of success, largely through subtle indoctrination of non-Jewish liberals over a period of several decades; and this is becoming more and more obvious to a growing number of Gentiles who simply do not want their ancestral traditions and civilization ruined. This predicament could easily culminate in a greater disaster for the Jews than the Babylonians, Romans, or Nazi Germans ever inflicted upon them, as nationalism grows and gains momentum, in spite of the likes of George Soros and the Hebrew media magnates of the USA. Ironically, their very attempts to destroy the fundamental roots of antisemitism as a means of preemptive self defense (let alone any moneymaking or “sticking it to the goyim”) are starting to breed such resentment that they are now running the risk of bringing destruction upon their own heads. They’ve been poking a big bear, and the bear is starting to wake up in a bad mood.

So at some point, as the comedian suggested, Jews should take a hard, honest look at themselves and ask why they are continually hated and attacked and expelled, and have been for millennia, whereas other ethnicities haven’t, or at least haven’t as much. Self-respecting Jewish people, considering themselves to be God’s Chosen, naturally prefer to blame the goyim rather than themselves; but this simply brings on more hatred, especially when some Jews have clearly been plotting to undermine the entire west in pre-emptive self-defense, and also from a little xenophobic resentment and hatred of their own.

Some of the causes of antisemitism may be unavoidable, like Jewish racial supremacism stemming from the biblical dogma that the Jews are Yahweh’s Chosen; but the current globalist and neo-Marxist attempts to destroy the very notion of whiteness may really prove to be an existential all or nothing game. If enough European Gentiles perceive that “the Jews” literally are working to destroy their civilization and their race, and turn to more or less radical nationalism, maybe even fascism, to protect themselves and their children from destruction, then the proverbial shit may really hit the fan on a biblical scale. A further complication/consideration is that a vehement Jewish belief in their own spiritual and racial superiority may be provoked to such a pitch that they may really be willing to nuke the world if they perceive they are facing a Mother of All Holocausts, or even if they perceive that they may have to return to being an oppressed and despised servile caste. It was this sort of vehement ethnocentric pride that inspired the Jews of the Hellenistic and Roman ages, after realizing that they were unlikely to overcome their Gentile overlords, to become apocalyptic and start hoping and praying for the end of the world—a notion that infected early Christianity, originally an apocalyptic Jewish movement, also.

This all leads to a question I’ve been considering for some time now, namely: Which is the bigger threat to western civilization: Judaism or Islam? But that’s a question I’ll try to answer some other time, insh’allah. 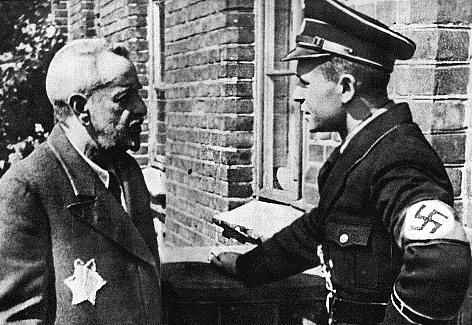 Mr Deasy halted, breathing hard and swallowing his breath.
I just wanted to say, he said. Ireland, they say, has the honour of being the only country which never persecuted the jews. Do you know that? No. And do you know why?
He frowned sternly on the bright air.
Why, sir? Stephen asked, beginning to smile.
Because she never let them in, Mr Deasy said solemnly.
A coughball of laughter leaped from his throat dragging after it a rattling chain of phlegm. He turned back quickly, coughing, laughing, his lifted arms waving to the air.
She never let them in, he cried again through his laughter as he stamped on gaitered feet over the gravel of the path. That's why.
On his wise shoulders through the checkerwork of leaves the sun flung spangles, dancing coins.