The Kama Sutra on How to Pick Up Women

The Kama Sutra is a classic ancient Indian manual on the wise, or at least relatively prudent, enjoyment of sensual pleasure, particularly the erotic kind; and so, almost needless to say, it is very interesting, even to non-Indians. The treatise includes entire chapters on, for example, biting, making marks on one’s lover’s flesh with one’s fingernails, and making appropriate vocalizations and slapping noises on one’s lover’s skin during acts of passion. I must admit, the Kama Sutra is probably the first classic of world literature I ever read. (As a teenager I eventually acquired a lavishly illustrated version, the illustrations of which, however, had little correlation to the accompanying text.)

Other cultures have had their own equivalents, of course. Ancient Rome’s most well-known example is Ovid’s Ars Amatoria (The Art of Love); the Chinese had plenty of their own love manuals, some emphasizing Taoist ideas of maintaining balance of sexual Yin and Yang; and of course there are plenty of books and websites instructing modern western men on how to be pickup artists, how to please their woman in bed and be a stud, how to prolong orgasm, etc. Purely by accident I assure you, recently I happened upon the advice, from a teaser for one of these modern books, that a man should look at a woman’s mouth a lot when she speaks, as a way of subliminally attracting her sexually. Whether it actually works or not I have no idea.

As a Buddhist I can’t really recommend that anyone take the advice of the Kama Sutra or any other love manual. Mainly I post the following as an aid in helping men to understand the female mind, which of course is different from the male mind, hallelujah and may politically correct gender equality be damned. Also it’s just plain entertaining, especially for those who are not feminists.

Most of the Sutra’s advice on picking up women is with regard to the wives of other men, which doesn’t seem very wise or prudent to me; but one should consider that this is for India, and most women were married, in those days especially, when they were still children. The elaborate chapters on attracting and winning a wife are mainly instructions on how to cause a timid, virginal girl to trust you. (It’s best to avoid such instructions nowadays, unless maybe you happen to be a virginal boy looking for true love.) Thus almost any advice on attracting a full-grown woman, in classical India, is bound to be with regard to married women, widows, and professional wantons like courtesans (although the latter require money more than finesse as an attractant, though finesse will earn their respect).

It is interesting, considering that this is from ancient India, a very different culture from our own, that much of it still applies to male/female behavior. That’s because human nature, including the emotional nature of the human female, is instinctive in the human animal. Much of our behavior is universal to our species, and always has been, and to hell with the postmodern idea that “it’s all just a cultural construct.”

The following is from Part 5, section 1:

The causes of a woman rejecting the addresses of a man are as follows:

1. Affection for her husband.
2. Desire of lawful progeny.
3. Want of opportunity.
4. Anger at being addressed by the man too familiarly.
5. Difference in rank of life.
6. Want of certainty on account of the man being devoted to traveling.
7. Thinking that the man may be attached to some other person.
8. Fear of the man's not keeping his intentions secret.
9. Thinking that the man is too devoted to his friends, and has too great a regard for them.
10. The apprehension that he is not in earnest.
11. Bashfulness on account of his being an illustrious man.
12. Fear on account of his being powerful, or possessed of too impetuous passion, in the case of the deer woman.
13. Bashfulness on account of his being too clever.
14. The thought of having once lived with him on friendly terms only.
15. Contempt of his want of knowledge of the world.
16. Distrust of his low character.
17. Disgust at his want of perception of her love for him.
18. In the case of an elephant woman, the thought that he is a hare man, or a man of weak passion.
19. Compassion lest anything should befall him on account of his passion.
20. Despair at her own imperfections.
21. Fear of discovery.
22. Disillusion at seeing his grey hair or shabby appearance.
23. Fear that he may be employed by her husband to test her chastity.
24. The thought that he has too much regard for morality.

The following are the men who generally obtain success with women.

1. Men well versed in the science of love.
2. Men skilled in telling stories.
3. Men acquainted with women from their childhood.
4. Men who have secured their confidence.
5. Men who send presents to them.
6. Men who talk well.
7. Men who do things that they like.
8. Men who have not loved other women previously.
9. Men who act as messengers.
10. Men who knew their weak points.
11. Men who are desired by good women.
12. Men who are united with their female friends.
13. Men who are good looking.
14. Men who have been brought up with them.
15. Men who are their neighbors.
16. Men who are devoted to sexual pleasures, even though these be their own servants.
17. The lovers of the daughters of their nurse.
18. Men who have been lately married.
19. Men who like picnics and pleasure parties.
20. Men who are liberal.
21. Men who are celebrated for being very strong (Bull men).
22. Enterprising and brave men.
23. Men who surpass their husbands in learning and good looks, in good quality, and in liberality.
24. Men whose dress and manner of living are magnificent.

The following are the women who are easily gained over.

The next extract is from Part 3, section 1:

When a man is trying to gain over a woman he should examine the state of her mind, and acts as follows.

If she listens to him, but does not manifest to him in any way her own intentions, he should then try to gain her over by means of a go-between.

If she meets him once, and again comes to meet him better dressed than before, or comes to him in some lonely place, he should be certain that she is capable of being enjoyed by the use of a little force.

A woman who lets a man make up to her, but does not give herself up, even after a long time, should be considered as a trifler in love, but owing to the fickleness of the human mind, even such a woman can be conquered by always keeping up a close acquaintance with her.

When a woman avoids the attentions of a man, and on account of respect for him, and pride in herself, will not meet him or approach him, she can be gained over with difficulty, either by endeavoring to keep on familiar terms with her, or else by an exceedingly clever go-between.

When a man makes up to a woman, and she reproaches him with harsh words, she should be abandoned at once.

When a woman reproaches a man, but at the same time acts affectionately towards him, she should be made love to in every way.

This last statement is very interesting. The meaning is essentially: if a woman is angrily abusing you while at the same time softly laying her hand on your arm, that’s it, she’s yours, take her now.

We shall now speak of love quarrels.

A woman who is very much in love with a man cannot bear to hear the name of her rival mentioned, or to have any conversation regarding her, or to be addressed by her name through mistake. If such takes place, a great quarrel arises, and the woman cries, becomes angry, tosses her hair about, strikes her lover, falls from her bed or seat, and, casting aside her garlands and ornaments, throws herself down on the ground.

At this time, the lover should attempt to reconcile her with conciliatory words, and should take her up carefully and place her on her bed. But she, not replying to his questions, and with increased anger, should bend down his head by pulling his hair, and having kicked him once, twice, or thrice on his arms, head, bosom or back, should then proceed to the door of the room. Dattaka says that she should then sit angrily near the door and shed tears, but should not go out, because she would be found fault with for going away. After a time, when she thinks that the conciliatory words and actions of her lover have reached their utmost, she should then embrace him, talking to him with harsh and reproachful words, but at the same time showing a loving desire for congress.

The whole book, incidentally, is public domain on the Internet, and can be downloaded for free here. Ovid’s there on Gutenberg too. 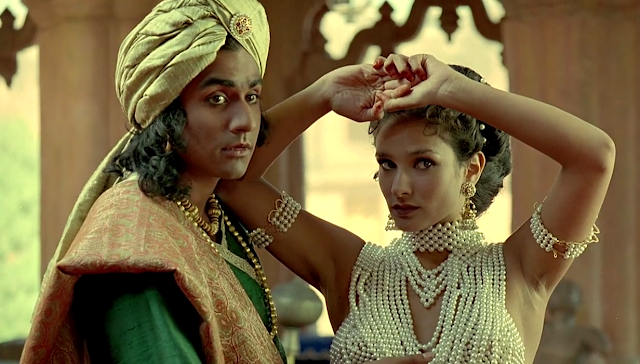