Whatever person, even unasked, speaks to others of his own morality and observances, whoever even of his own accord speaks of himself—adept ones say his is a non-Ariyan way (anariyadhammaṁ) —Duṭṭhaṭṭhaka Sutta, verse 3

Those of you who are familiar with ancient Indian Buddhist philosophy may know that the Pali word usually translated as “noble” is ariya; for example, the four Noble Truths are the cattāri ariya-saccāni, and any Buddhist saint or sage who has attained at least a glimpse of Nibbāna is called an Ariya. You may also be aware that this term is etymologically the same as the Sanskrit word Arya, used by some Nazi types and white nationalists, as in the Aryan Nation or the Aryan Master Race. The purpose of what follows is to explain the connection. The explanation extends back into remote prehistory.

Back around 5000BCE there arose a tribe, or family of tribes, probably north of the Caucasus Mountains and the Black and Caspian Seas, who are now referred to as the Indo-Europeans or, in their earliest manifestations, as Proto-Indo-Europeans. They spoke a language (or family of languages) related to many modern ones, including English, Russian, Greek, Latin, and Sanskrit, and many of them evidently had fair skin, blue eyes, and blond hair. They were physically large and aggressive, had a strong social system, were among the first to tame and ride horses, and also some of the first to make iron weapons and tools; and they were so successful that they spread out in all directions of the compass in a huge series of migrations and invasions of others’ territories.

It is known that some of the prehistoric Indo-Europeans who spread eastward into Asia called themselves Arya, or Aria, or Ariya. These eventually invaded what is now Iran (which is itself a corruption of the ancient word “Arian”), Afghanistan, Pakistan, and India, along with several other regions—including one group of Indo-Aryans who wound up ruling a nation in northern Syria called Mitanni. The other groups of Indo-Europeans may not have called themselves by this same name, but white nationalists in Europe a hundred and more years ago decided to refer to all Indo-European peoples as “Aryan,” and it remains a loose synonym for “Indo-European.” But though it has been used as a shorter and easier synonym, including sometimes by me, the philologists and other similar academic authorities restrict the term “Aryan” to those tribes, now mostly ancestors to north Indians and Iranians, who are known to have called themselves by that name.

When the Indo-Europeans were spreading out from their ancestral homeland, they usually were invading territory already occupied by other people; and what often occurred is that the Indo-European invaders would become the new ruling class, with the subject peoples being a mix of the aboriginals and some of the rank and file of the invading forces. This is what happened in northern India: around approximately 1500BCE, Indo-Aryan invaders from Bactria (approximately Afghanistan) conquered the declining Indus Valley Civilization and set themselves up as the new overlords. This was the origin of the notorious Indian caste system: As a rule, the chieftains and other military leaders were set up as the Kshatriya caste, the priests of their Vedic, Aryan polytheistic religion gave rise to the lineage of Brahmins, the common men among the invaders became the ancestors of the Vaishya caste  consisting mainly of landowners and merchants, and the stereotypically small, dark-skinned, snub-nosed aboriginals (as they are described in the Rig Veda) became the ancestors of the Shudra peasant caste, as well as the outcastes lying outside the formal social system.

There was of course a certain amount of social mobility, so that low-caste people of some consequence or merit would be raised up in the social hierarchy, and some high-caste ones could be cast down, for example by a Brahman disgracing himself through some scandalous deed like eating the wrong kind of meat. I have read that it was not uncommon for high-ranking non-Aryans, like the leaders of formidable aboriginal tribes, to be given honorary Kshatriya status as a reward for collaborating with the new ruling class. Also, judging from the fact that only a relative few of the higher-caste Hindus of today look European (a very few Brahmins still have blue eyes, for example), thousands of years of high-caste Aryans mating with the prettiest Dravidian girls, etc., has resulted in northern India having a population of what some white nationalists would call “mud bloods.”

So anyhow, the Aryas being the ruling class, Arya, or Ariya in Pali, came to have the meaning of “noble,” because the social nobility, the leaders, were literally Aryan, while the common masses generally were not. The term Arya came to be associated with European looks, and also with genteel manners and civilized “good breeding.” It came to be a term of praise for what was considered to be superior; and it retained that meaning as the older meaning began to be lost in obscurity, as the Indians increasingly believed that they sprang directly from Indian soil and were never a conquering tribe of barbarian invaders. Finally the word became something like the word “gentle” in English: it began with the Latin word gens, signifying an ancient or illustrious family, and later came to mean “refined,” “well-mannered” like a high-bred person, until the original meaning was forgotten, and the word had evolved to mean something quite different.

In the ancient Pali texts one may occasionally encounter the word ariya in the older sense of “Indo-European,” for example in the description of some hill tribe; but in Buddhism it came to mean “noble” in the sense of “civilized,” “socially advanced,” even “praiseworthy.” And so, ancient Buddhism adopting preexisting terms for its new philosophical system, the word ariya was adopted to describe anything spiritually or ethically advanced. Nobility of ancestry mutated into nobility of demeanor. And there it is.

A similar case of old words getting new Buddhist meanings is the term arahant, which often isn’t translated at all in English renderings. For Theravada Buddhists the meaning is a person who is fully enlightened, including the Buddha himself. But the word literally means “worthy,” or “worthy one.” I have read that magistrates and other political bigshots in ancient India were called araha, and so it became a generic word of praise or glorification. Even so, the original meaning of the root of the word continued to have its old meaning, hence Pali terms like daṇḍāraho, “worthy of the stick,” i.e. “worthy of punishment.” But maybe more on word etymologies some other time. 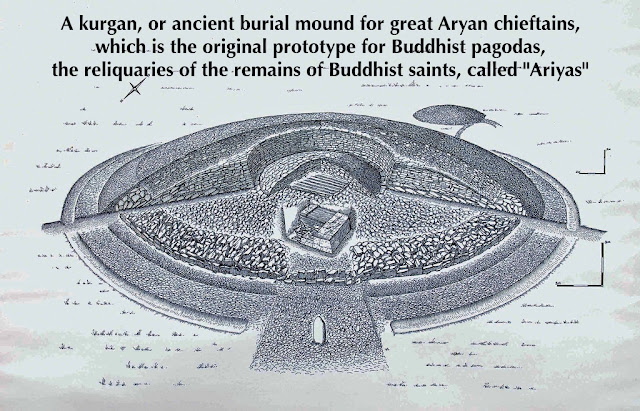