On the Phenomenon of Right-Wing Western Buddhism


Having left behind what is loved and what is unloved, not taking up anything, not dependent at all, completely freed from fetters, rightly he would wander in the world.

He does not find any value in accumulations; he would dispel preference and passion for acquirements. He, independent, not to be led by another, rightly would he wander in the world.

Unobstructed in speech, thought, and action, rightly having understood the Way, having the state of blowing out [Nirvana] as his goal, rightly he would wander in the world.

Whatever mendicant would not be self-satisfied, thinking, “He pays respect to me,” and even if abused would not be resentful, and having got food from another would not be elated, rightly would he wander in the world.

—from the Sammāparibbājanīya Sutta, or the Discourse on Proper Wandering, from the Sutta Nipāta

A couple of weeks ago the editor of a western Buddhist magazine contacted me and requested we do an interview, primarily on the issue of right-wing or conservative western Buddhism, and its apparent increase in recent years. I did participate in the interview, which went fairly well and was fairly interesting. We’ll have to wait and see how the article turns out.

The Buddhist editor’s main question was a good one, and it caused me to think about this relatively new phenomenon of “anti-SJW” western Buddhism, and why it appears to be growing. It’s a question well worth looking into, and it strikes me as odd that I’d never really considered it before, so I’ve decided to write my own article on the same subject, from the point of view of one of those very same “anti-SJW” western Buddhists. I also did a video interview with Herr Brian Ruhe on this subject, a link to which is here.

Right off the bat I may as well point out, and not for the first time on this blog, that there is no necessary reason why Buddhism, especially Theravada Buddhism, should be viewed as inherently politically leftist. Some aspects of traditional Buddhist ethics, like pacifism, may be more associated with the left; although other aspects, like the emphasis on individual sensual restraint, would be more associated with the political right. Most political conservatives in Burma are Buddhists, with the “progressives” often “progressing” to secular materialism, or maybe Christianity. Similarly, conservatives in the west, being rather traditionalistic, tend towards Christianity (or maybe Judaism), if they are religious at all. Thus the predominance of political leftism in western Buddhism is an artifact of circumstance, not a political, logical necessity.

There are two main groups, as I see the situation, of right-wing western Buddhists. They are not necessarily related, and have different reasons for favoring Dhamma, although there is some overlap between them. For the sake of convenience I’ll discuss them separately.

So, first we have the “hard right” white nationalists and other more or less fascistic types. (Whether actual fascism is really right-wing or not is very debatable, but for the sake of argument and convenience here, we can just assume that it is.) This type of western Buddhist tends to lean politically hard right first, and then later turns to Buddhism.

Though most right-wingers tend to be conservative, and most conservatives in the west, especially if they are religious, follow their ancestral tradition of Christianity, these particular rightists do not. I assume this is partly due to plain old antisemitism, in the sense of not wanting to worship a deified Jew or to follow what is essentially a schismatic sect of Judaism. But I also assume that a major reason why white nationalist types turn to Buddhism is because they are searching for a more European, or at least Indo-European (“Aryan”), spiritual system more in harmony with the spirit of the race, or some such.

By the same token there has been a surge in European paganism also, especially Odinism. This would obviously qualify as more distinctively European, if only northern European; but the problem with neo-paganism is that all the traditions and initiatory lineages went extinct long ago when Christianity became a kind of religious monopoly in the west. There may be some vestiges surviving in systems like Wicca, and valuable information can be gleaned from medieval Scandinavian texts, and so on, but still the new systems are a kind of replica rather than the original, and I suspect that a lot of the neo-paganism that is practiced is little more than LARPing. Also, I suspect that a revival of ancient polytheism in the west may not strike traction, considering how radically different our understandings of the world have become. Whatever new spiritual system arises should be more or less in harmony with scientific empiricism, and I’m not sure how worship of gods like Odin and Thor would harmonize.

One dilemma for western culture is that Europe has produced no great spiritual figure, no great prophet or sage, that has founded a lasting religious system. There were some in the distant past, like maybe Socrates or Apollonius of Tyana (a Greek who lived mainly in Anatolia) or even the original Odin, but none who has been able to compete in the west with Christianity. The Arabs have their Prophet, the Chinese have their Confucius and Lao Tzu, the Indians have many great saints and founders of religions, but the Europeans have no obvious ones, aside from flashes in the pan and some great Christian saints—who, again, were followers of a schismatic sect of West Asian Judaism. (Maybe Karl Marx could be considered a prophet of a new system that rivals Christianity in the west as well as in the east, but Marxism too could be called a schismatic sect of Judaism. And anyway, it’s spiritually bankrupt.)

Many of the “hard right” Buddhists of the west have turned to Buddhism, at least in part, due to Julius Evola’s glowing praise of that philosophical/religious system. Evola, an Italian “superfascist,” considered Theravada Buddhism to be the most suitable religious tradition for the spiritual aristocracy of the west. He held this view because he considered archaic Buddhism to be austerely “virile,” aristocratic (in that the Sangha of monks were viewed as a kind of initiated spiritual elite), and of course, Aryan. Buddhism is not originally European of course, but at least it is very Indo-European, and comes about as close to a viable Indo-European or “Aryan” spiritual system still workable in the modern world. It appears not to be a perfect fit for fascistic spiritual seekers, however, as quite a few of them take issue with early Buddhism’s uncompromising pacifism, and also with the Buddhistic idea of anattā, or No Self. I may as well also add that, though the Buddha himself was probably ethnically Aryan, the philosophical roots of Buddhism are not purely so, but extend all the way back to the prehistoric non-Aryan Indus Valley Civilization. A religious system which comes closer to primordial, archetypal Indo-European religion would be something like an archaic form of Hinduism, such as may still be found in northern India, in which Brahmins still recite the Vedas and perform fire sacrifices to the gods. But pretty obviously, Buddhism fits modern and postmodern western society better than sacrificing to the gods for sons, cattle, and victory in battle. 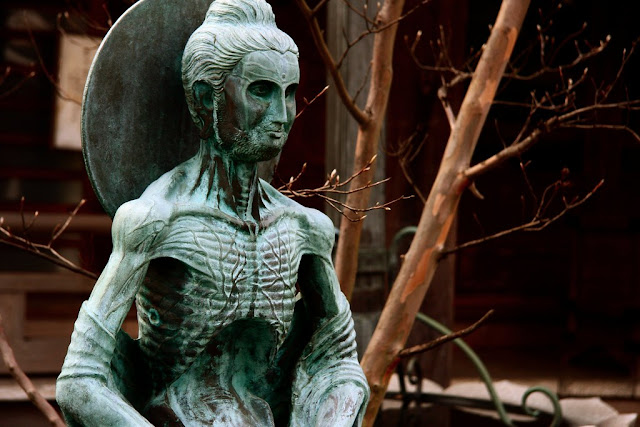 The second group of right-wing western Buddhists, to which group I personally belong, are more libertarian or classical liberal, insisting on freedom of thought and expression, and are repulsed by the cultish nature and hysteria, etc., of political correctness and cultural Marxism. Many of these, myself included, were Buddhist leftists, and then were driven away from the left, or just stayed in the same place as the left lurched further leftward and left them behind in the new Right. So unlike the first group, this group is much more likely to be Buddhist first, and only later to find themselves on the political right wing. Libertarian western Buddhists are often loners, being unable to abide the leftist virtue signaling, or just weak, sloppy Dharma, at elitist Dharma halls. Also, like the Buddhist white nationalists, they are mostly male. I may as well add that some right-wing western Buddhists have been politically moderate conservatives their entire adult life. They are attracted to Buddhist philosophy, ethics, and meditative practice because of some non-traditional circumstance, like a friend suggesting that they try a Goenka retreat, or marriage with a devout Buddhist Southeast Asian girl.

Some overlap exists between this second, larger group and the first, partly due to some classical liberal western Buddhist types being so utterly revolted by elitist Starbucks Buddhism, and Social Justice in general, that they fling themselves as far right as possible just to get away from it. Also, the radicalism of the left and the right are not so different in some ways, especially if fascism is considered to be far right.

In addition to some ideological overlap, and a predominance of maleness, both of the described groups of right-wing Buddhists have other qualities in common. Obviously both are emphatically anti-SJW and anti-Marxist, and both, largely as a result of the predominant maleness of both groups, prefer a more stereotypically masculine and head-oriented approach to Dharma practice. The effete west has become deeply antimasculine, which has resulted in a kind of masculinity crisis, especially among younger men. Some feel a deep need to be true to themselves as they seek purification of spirit, or whatever they choose to call their highest spiritual goal, and intuitively prefer the path of the “Divine Masculine,” the path of the spirit warrior, so to speak, requiring archetypal masculine virtues such as fearlessness, austerity, a thirst for freedom, an emphasis on head rather than heart, and on cessation of delusion more than cessation of suffering. The left has turned away from that, so some seekers find it on the right. They may also conveniently avoid troublesome feminists who view men as the Enemy via religious celibacy.

As I say, I am of the second group, the classical liberal Buddhists driven rightwards by the neo-Marxism that has pervaded so-called “liberal” society; but I do interact with members of both groups. At any rate, the ranks of both groups appear to be growing, and that is good. 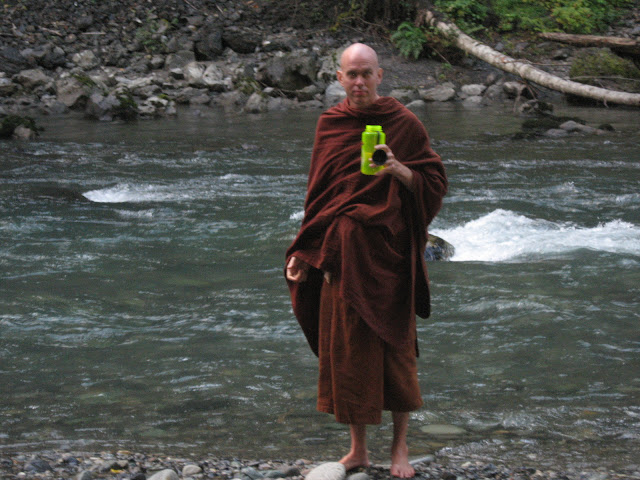