That fierce spirit was called Grendel, the famed border-walker, he who occupied waste-lands, the fen and the fastness, the homeland of the giant-race — the ill-blessed man inhabited them for a time, after the Creator had condemned him; the eternal Lord avenged that killing on the kin of Cain, because he slew Abel. He did not profit from that feud, but the Measurer banished him for that crime, from humankind. Thence all misbegotten beings sprang forth, great demons and elves and orcs, likewise giants, which struggled against God for a long while.  —from Beowulf

Oh gods, this is a veritable gift from heaven: a whole new kind of political incorrectness. The following text promotes negative racist stereotypes against elves.

It’s the introductory first part of the short story “Tanya: Princess of the Elves,” by Larry Correia, in Baen Books’s Free Stories 2011. The whole story is worth reading (a little later on there appears an orc, a vowed enemy of the elves, named Stab-Fighting Warrior of Righteous Vindication, who likes Rush Limbaugh and Fox News); and the book which contains it may be downloaded for free here. Enjoy…or, be deeply offended, outraged, and even traumatized by fascistic racist bigotry. Whichever you prefer. 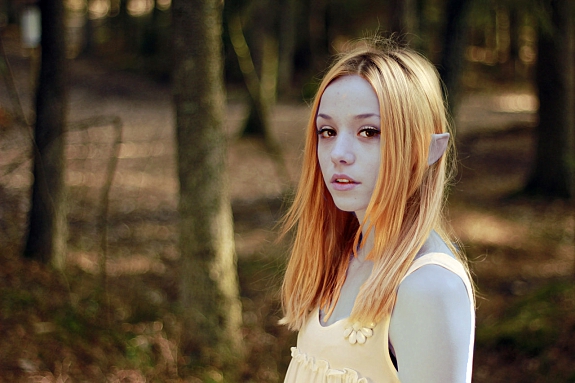 Once upon a time, in the state of Mississippi, there dwelt an elf princess. The princess lived in the Enchanted Forest with her mother, the queen of the elves, in a ninety-foot long aluminum double-wide trailer.

“I’m bored, Momma,” the princess of the elves whined. She was sitting on the couch and painting her toenails. The princess had been complaining a lot lately. “This is stupid, stupid and boring.”

Queen Ilrondelia grunted and used the remote to turn up the volume on the TV so she wouldn’t have to listen to her youngest and only daughter. It was an infomercial about some blanket thing with sleeve holes for your hands so you could sit all warm on the couch and still work the remote. The queen decided she needed one of those and wondered if they made it in her size.

“Tanya! Write down that number,” the queen ordered. “I need one of them snuggly blankets for keeping warm.”

“You ain’t listening. How come you won’t let me do nothing?” Tanya said.

“You wanna do something? Get that skinny ass offa’ the couch and get a ink pen like I said!” the queen bellowed.

“Yes, your majesty,” Tanya answered sullenly, got up, and went to the kitchen.

“And fetch me some Ho-Hos while you’s at it…” the queen said, then thought about it. “And some ranch dressin’ for dippin’ sauce.” She returned her attention to the TV. Tanya came back, but as usual, took her sweet time, so the phone number was gone, and the queen would be forced to wait on getting her snuggly blanket with sleeves, but she did bring the box of Ho-Hos and the bottle of ranch dressing like she’d been told. The queen took the snack and glared disapprovingly at Tanya’s too-small shirt. “Your belly’s stickin’ out.”

The queen snorted. Fashion. The girl had no sense. Tanya went back to the couch, but one of the cats had taken her spot. Tanya tossed it on the floor and went back to painting her toes.

The queen forgot about the TV for a minute and concentrated on her kid. She didn’t do that very often. “So… You wanna do something’?” the queen asked.

“So the Enchanted Forest ain’t good ‘nuff no mo?”

“That ain’t what I meant,” Tanya said. “But elves used to do stuff. You know. Outside.”

The queen of the elves pondered on that while she unwrapped a Ho-Ho and squirted ranch dressing on it. Her people had a sweet deal. The government paid them good money to stay right here in the Enchanted Forest, but some of the younger elves were getting uppity, talking about adventure. They’d been watching too many movies with fancy movie elves in them. They didn’t realize how good they had it here in the Enchanted Forest.

The world had moved on. It wasn’t a magic world no more. It was a world of techno-thingies and computing boxes and inter-webs. It wasn’t a world fit for her kind.

The queen knew her youngest was going to be a problem child since she’d gotten that butterfly tramp-stamp tattooed on her back. Somehow she’d gotten it in her head that she wanted to “see the world” and such nonsense. She even talked to those damn pixies. Hell, the girl probably didn’t have the smarts not to consort with a filthy orc if left on her own. But since Tanya was the prettiest girl in the trailer park she had all the boys wrapped around her finger. Her crazy talk could cause trouble. Trouble could make it so that the government checks quit coming.

The government didn’t want people knowing about monsters or magic or the things that lived on the outskirts. Other than shopping at the Walmart, the Elves kept to themselves. All it would take was one dumb youngster to go and pull something stupid in town, and their sweet gig would be up. And with Tanya flouncing around like a cheap pixie, talking to humans, and sneaking out, it was only a matter of time. The princess was a pain in her ass.

“Tanya, Tanya, Tanya,” the queen said around a mouth full of Ho-Ho, “what am I gonna do wit’ you?”

Tanya looked up from her toes. “Let me travel. You let other elves go out. You let Elmo and the trackers get work.”

That much was true. She wasn’t above farming out her people for odd jobs, under the table of course, to supplement the government checks. In fact, Harbinger from MHI had called earlier, saying he needed a diviner, and he was willing to pay big bucks for only a few days labor. “So that’s what you’s all spun up on? Cause I’m sendin’ Elmo with that boss Hunter? That’s ‘cause there’re some elves smart enough to do some job, get paid, and get back! You’d just screw it up. You ain’t wise like them yet.”

“I can do magic, too! And I’m educated!” Tanya shouted loud enough to make two cats retreat under the couch. “I got my GED.”

The queen frowned while she chewed, chins bouncing. She never should have let the girl take that correspondence course. It had made her even more uppity. It was time to put the royal foot down. “I forbids it. You’ll be queen someday, so you need to learn ‘bout how to be a proper type ruler, meanin’ you ain’t goin’ nowhere.”

Tanya screeched in frustration and stomped off. She slammed the door to her room hard enough to shake the whole trailer.