The False Dichotomies of Political Irrationality


There are two kinds of people in this world: those who divide people into two kinds, and those who don't. —Robert Benchley

The western world—maybe especially in America, I don’t know—is becoming increasingly polarized into two camps: not so much traditional left and right anymore, but more like progressive globalists and more or less conservative nationalists. I assume you’ve already noticed this. But the thing is that not only have people tended to gravitate towards one or the other ideological camp, their attitudes have also become polarized to the point of seeing just about everything subject to value judgements in terms of black and white, good and evil, with little little or no grey in between. It’s getting to the point (maybe it’s already been there for some time) where the the people on each side not only consider their own side to be better than the other, which is standard human nature, but to consider the people on the other side to be not only wrong but willfully wrong, even downright, deliberately evil.

I’ve heard it said that conservatives consider liberals to be wrong and foolish, whereas liberals consider conservatives to be just plain bad; and although the right is increasingly viewing the left as horrible also, nevertheless this phenomenon of ideological intolerance does appear more glaringly obvious on the part of the left, especially the new left. Aside from Muslims, who might be considered conservatives of a sort, leftist radicals are much more likely than right-wingers to attack people in the streets in the United States; and even mainstream leftists are increasingly likely to condone hatred of the opposition, possibly to the point of endorsing the assassination of the President, or “punching a Nazi,” with “Nazi” being very vaguely defined, if defined at all—it could mean simply anyone who rejects so-called Social Justice, alias cultural Marxism, or anyone who votes Republican.

Thus we observe the spectacle of anyone criticizing a black person for any reason whatever (not including black conservatives, who have forfeited their victim status by refusing to be victims) being accused of racism, anyone criticizing a woman (again, unless she’s conservative) being called a sexist, etc. But beyond this, one is no longer allowed simply to consider some politically correct phenomenon to be misguided—one must either accept it unquestioningly, even glorify it, or else one is a phobic hater and bigot. For example: one must wholeheartedly endorse a borderless welfare state, despite the impossibility of it actually working in reality, or else one is a racist, xenophobic white nationalist. Another example: one must either celebrate the existence of homosexuality, or else be a hate-filled homophobe. Here’s an example that is not restricted to the left: one must hold the Jewish people, and sometimes Israel also, in high esteem, considering them to be special somehow, in accordance with their own beliefs, or else one is an antisemite, and possibly also a Nazi. I was at the receiving end of that one myself not long ago; simply by observing that antisemitism is increasing on the right as well as the left, without endorsing it, simply pointing it out, I was accused of being an antisemite and banned from commenting on a largely Jewish news blog, which I still read every day because I value its content. There is a similar politically correct taboo against pointing out that Hebrews are disproportionately represented in America’s mass-media ruling class.

Almost the entire spectrum of possible opinions is denied by hate groups—or rather, organizations that accuse and condemn alleged hate groups, such as the Southern Poverty Law Center (SPLC). Either an opinion is right and good (= politically correct), or it is wrong and bad (= politically incorrect), and to be punished and silenced. Or, I suppose, there is the third option of being so apolitical as to be negligible, like recipes for baking squash. Only Muslims, it seems, are allowed freely to disapprove of practices which cause, and are symptomatic of, moral decline, without being reviled because of it.

Sometimes a middle ground between the poles of political absolutism may be the best policy—in fact it’s almost always the best policy. A case in point is the attitude of Milo Yiannopoulis towards homosexuality. Milo himself is flamboyantly gay, in addition to being an anti-SJW critic and troll; yet he has expressed the idea that homosexuality should remain transgressive and taboo in western society. He doesn’t think it should be illegal or strongly denounced by mainstream culture, but he would prefer that it be a kind of counterculture, an act of independent defiance of mainstream norms. Ayn Rand also, an extreme libertarian type, considered homosexuality to be immoral and “disgusting,” but she also advocated the repeal of all laws against it. The idea is that freedom is good, presumably even a human right, yet mainstream culture should continue to promote a norm that is conducive to the health, stability, and continuation of civilization, and in this case heterosexuality is just plain necessary for society to perpetuate itself.

Another example of the new left’s illogical Law of the Excluded Middle concerns abortion. Nowadays it seems that one must be totally in favor of free abortions for any reason right up until birth, possibly while a woman is actually in labor with a perfectly healthy baby…or else one is a hateful bigot opposed to women’s health and their rights over their own body. I consider abortion to be unethical, technically the killing of an individual human being from a biological as well as a Buddhist point of view, but I can accept it not being totally illegal. There could be cases in which it really is the lesser of two evils; and it could certainly be useful for preventing severe birth defects, for instance. There is a broad middle ground between absolute prohibition of any abortions for any reason and what is essentially government-funded infanticide used as a kind of birth control for irresponsible women.

Reminiscent of Milo’s attitude towards homosexuality is my own attitude towards cannabis. I enjoyed the illegality of it, back in my long-haired days when I smoked it regularly; it added a kind of zest to using it, an extra minor thrill from being a rebel and violating taboos and the law. Now you can just walk into a shop and buy it as a soulless commercial product. It does make sense to legalize it though, or at least to decriminalize it, for various reasons, I have to admit. For that matter, high school keggers were much more exciting and fun than sitting on a bar stool buying drinks as a legal adult. Breaking rules can be fun.

Anyway, there is certainly a middle ground, a middle path, between absolute condemnation, or hateful bigotry, and pulling someone or something into the mainstream and glorifying them or it. There is a middle ground between unconditional love and raging hatred and intolerance; but apparently the left (and quite a few on the right also) either can’t understand this or are playing a Machiavellian game of political manipulation—probably a combination of both.

It really shouldn’t be necessary to explain this stuff. Most of it is pretty damned obvious. Then again, the foolishness of a borderless welfare state, or of feminists allying themselves with Muslim migrant men against the much less misogynistic men of their own culture, is pretty freaking obvious too, and too many on the “progressive” left just don’t get it. A free society requires self-governance and a modicum of wisdom and emotional maturity, but this has become practically out of fashion in the postmodern, decadent west.

Either you would sleep with a transsexual or else you’re an evil, hate-filled transphobe. If you think biological males who identify as females competing against biological females in athletic competitions is unfair (and it arguably very much is), you are similarly a hateful transphobic bigot. If you acknowledge certain empirical facts you are hateful, regardless of your reasons for acknowledging them: violent crime rates among blacks; the near monopoly on terrorism by Muslims; racial IQ differences; Jewish domination of fields that influence public attitudes in the west; and of course actual biological differences between males and females, are taboo subjects, they’re “hate facts,” and are vilified by leftists accusing anyone who mentions them to be motivated by hate.

One really can disagree, mind you, without being hateful or phobic. One can point out unpleasant facts, or opinions, without being motivated by hate. A person can think homosexuality, or Christianity, or conservatism, or Marxism, or abortion is misguided, and not endorse it, without seething with malice. Someone who doesn’t like spiders, and who doesn’t want one crawling on him, isn’t necessarily arachnophobic. To admit to finding spiders creepy is not “hate speech.” But try explaining something like this to someone howling in hysteria, maybe wearing a black mask and bashing people with a shield bearing the slogan NO HATE on it.

What the current predicament boils down to, in mainstream culture that is, is that you must endorse unreservedly the politically correct Social Justice narrative, or you are evil and wrong, with no half-measures. But that attitude is being done to death, and is wearing out fast; the Overton window has left the foundation of empirical reality in favor of leftist utopianism. The left and their narrow window of Right View are lurching ever leftward and farther away from the attitudes and feelings of the common person, who actually does possess a modicum of common sense, and a resistance to a globalist elite that despise him while attempting to manipulate his feelings and beliefs. Cultural Marxists have become so divorced from the common person, and from empirical reality, that they are losing the control of the narrative that they patiently spent decades to attain, and now they are getting desperate.

Also, an important point to bear in mind is that when discourse breaks down, with one or both sides unwilling to work out their differences peacefully—or even heatedly but nonviolently—then violence become much more probable as a final resolution. The left’s refusal in many cases to “negotiate with fascists” could easily result in real civil war; and if that happens, then the emasculated soy people of the left are going to meet with some very harsh realities, with no safe spaces available. But at this point many of them are incapable of reasonable debate anyhow, much less of foreseeing the inevitable consequences of their self-destructive policies.

Then again, those of the new left are not polarized with regard to everything: for instance, the primordial human polarity of male and female is rejected in favor of an androgynous middle state, as a kind of “reasonable compromise” perhaps. But this is due to their absurd inability to understand that equality does not require uniformity. With regard to most other issues, though, they appear to be unwilling to compromise, and vehemently insist upon having coins with only one side. 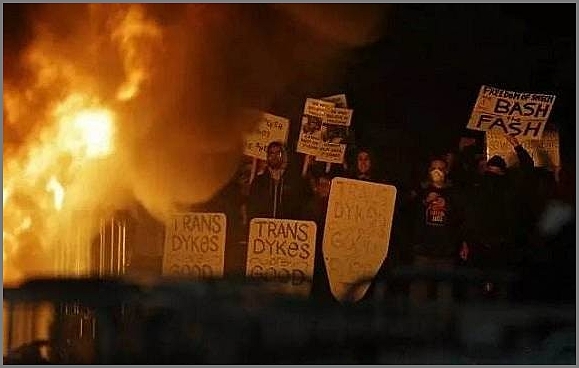 Here is a Matt Christiansen video touching upon this very subject, which I encountered in my newsfeed about an hour after finishing this post: