You have enemies? Good. That means you’ve stood up for something, sometime in your life. —Winston Churchill

Churchill has been accused of the atrocity and war crime of bombing cities, i.e. civilian targets. I personally doubt that, as has been claimed by his detractors, he was fervently hoping for thousands of Britons conveniently to die as an excuse to start bombing German cities, though he did promptly use an accidental bombing of East London to start his own bombing campaign against Berlin. With regard to the gradual development of wantonly bombing German-occupied cities as a way of crushing morale and wrecking the Axis economy, I have read that it resulted at first from German air superiority in the early years of the war. With the Luftwaffe in control of the sky by day, the only way to bomb German military targets like armament factories on the outskirts of cities was to bomb them by night, when the British planes couldn’t be seen; but without GPS or smart bombs the only way to make sure of hitting a specific target was by carpet bombing the entire area. By the time the Allies had sufficient air power to make flights by day when they could actually see their targets the practice had already been established, and so it remained. Or so I have read.

At any rate, accusations of war crimes are almost meaningless, considering the multitudes of atrocities perpetrated by all sides. As the American military genius William T. Sherman famously said, war is hell. Strangely though, it seems like only the losers of wars are guilty of war crimes. Fire bombing Dresden and nuking Japan were not war crimes because we won.

Churchill has been accused of being a drunk; but then again, so were many other great leaders, including Alexander the Great, Ulysses S. Grant, and most Russians. (←a joke)

Likewise, he has been accused of being a fraud for hiring ghost writers, which he did for articles in periodicals especially; though pushing the point to saying ghost writers wrote all of his books is silly. He did have a distinctive style in writing, and was good at it; in fact he won the Nobel Prize for Literature in 1953. Similar arguments apply to the accusations of art fraud, referring to the very real irregularities and dishonesties in his painting career. He did, however, paint his own paintings. Whether he was a better artist than Adolf I don’t know, and am not qualified to judge. Anyway, this sort of thing has little to do with his career as a ruthless and ultimately successful warlord. Emphasis on this sort of stuff is an indication of the eagerness of some folks to find fault with the man.

Much more importantly, Churchill has been accused of ruining the British Empire with his disastrous insistence on fighting Germany to the bloody end, presumably for his own fame and glorification. The Empire was broke, with much of it in smoking ruins, after the war—which, according to the accusers, resulted in the easily avoidable liquidation of the greatest Empire in history shortly thereafter. But Empire and colonialism were already on the way out, already well on their way to being very politically incorrect in modern western civilization. The fall of Singapore to the Japanese in 1942 (due not to Churchill’s fault so much as to the incompetence of the military leadership there, and their failure to predict that the Japanese would attack from the north, through the Malay Peninsula) was especially damaging to Britain’s prestige, and to British colonialism in general: the dark races saw that their colonialist white overlords were not invincible. So the collapse of the Empire after the war was not persuasive evidence that fighting Germany to its surrender was a mistake. And that in addition to the facts that Hitler couldn’t be trusted, and that allowing a huge militaristic dictatorship right across the English Channel was intolerable to British people endowed with a backbone.

Churchill’s nationalistic imperialism was one reason why he was ejected from Downing Street shortly after the war was over. He was gotten rid of pretty quickly, partly in order to facilitate the liquidation of the Empire, which he vehemently opposed. I will return to this point later, insh’allah.

I may as well mention Churchill’s strategic desire for Germany and the USSR to exhaust their strength by fighting against each other. Churchill loathed Marxism at least as much as he loathed Nazism, and he even had the perception to associate it with Jewry—though he favored another form of Jewry, namely Zionism. (To be fair though, even the SS toyed with the notion of Zionism as a way of being rid of Hebrews in Europe.) Churchill was reluctant to invade France, which of course Stalin very much wanted him to do, because of this desire to let the two totalitarian states smash each other to death, and found himself at odds with both Stalin and Roosevelt (the latter of whom was a real pinko, and seemed more eager to satisfy Stalin than Churchill). Britain was reluctant to form a mutual defense pact with the Soviets before the war, resulting in the surprise pact between Hitler and Stalin, for similar reasons, though that wasn’t Churchill’s doing.

Churchill’s case is similar to that of Donald Trump in some ways—general unpopularity with the ruling Establishment; brazen outspokenness against a looming rival (Churchill against Germany, Trump against China) before the danger was obvious and before it was popular to do so; energy; seemingly perverse stubbornness; nationalistic patriotism; popularity with the common people as a strong, decisive leader in a time of crisis; and so on. One striking similarity with Trump that is very applicable to this whole discussion is the bizarre schizophrenia with regard to the journalistic coverage of his leadership and, secondarily, his life. Even without the lapse of decades Trump’s words and actions are interpreted radically differently by different people. Those who are biased in his favor bias their views of him favorably, in some cases even to the extent that they see him as a genuine savior of western civilization; and those who despise or otherwise dislike him will be much more inclined to put a negative spin on virtually anything that he does or does not do. Some even insist that he’s Hitler incarnate. The same polarization evidently applies to Churchill. The disapproval tends to precede the negative spin and accusations, unless the accusers began as openminded readers of David Irving’s book and were persuaded by it, or some such; though Irving himself is a fan of Hitler and had his own axe to grind.

Uncharitable people will dwell on Churchill’s heavy drinking, his alleged art fraud, his friendly relations with Jews (that last also like Trump), his failures and/or atrocities in war—but even historians ready to spend some ink on his multiple defects and failures have declared him to be possibly the greatest national leader in a time of dire crisis in all of history. If anyone could lead Britain to victory over the Germans, it was him, and he did it.

People tend to look at historical narratives very naively or simplemindedly, as though they have to have good guys vs. bad guys; and so they feel the need to determine (if the official narrative hasn’t determined it for them) which side wore the white hats. But the harsh realities of human nature and of politics don’t work that way. Almost inevitably, BOTH SIDES are ruthless, unscrupulous, and amoral. Pretty much ALL great national leaders are ruthless bastards. There is good and bad on both sides…so it’s not so much a matter of which side was the good guys as a matter of which side won—that is, which side outcompeted the other in the Darwinian struggle for survival. And Churchill’s side won, and arguably deserved to win. Setting aside all romantic idealism about good and bad, right and wrong, from the ruthless Darwinian perspective of natural struggle it’s the side that wins, no matter how it wins, that has shown itself to be “superior.”

That is the strongest, most decisive evidence that Churchill was a better leader than Hitler: Churchill won, even though Britain lost most of its Empire and practically ceased to be a world superpower (not really Churchill’s fault, methinks); whereas Hitler, due to his own decisions and his own mistakes, led his nation to smoking ruins and a partition of Germany that lasted for decades. The mistakes Hitler made proved more disastrous than the ones Churchill made. If the Germans had played their cards just slightly differently they probably could have won both World Wars (though if they won the first one, the second one may not have happened), but they didn’t.

To any fascistic types who read this, I am quite willing to concede that Hitler was no worse than any number of others, and may very well have been striving tirelessly for what was best for his people—but so was Churchill, or so it seems to me. Also, Churchill obviously proved to have done a better job of it in the end. People might say that if he allied with the Führer then both nations would have been much better off, but I’ve given my responses to that idea above (review: Hitler was untrustworthy, and nobody wants a militaristic empire next door). I may as well toss in here the observation that one other famous Englishman who opposed and defied Hitler practically from the start was Enoch Powell, because he too saw him as a threat to British freedom. But I still haven’t read David Irving’s anti-Churchill book, so maybe I’ll change my mind. 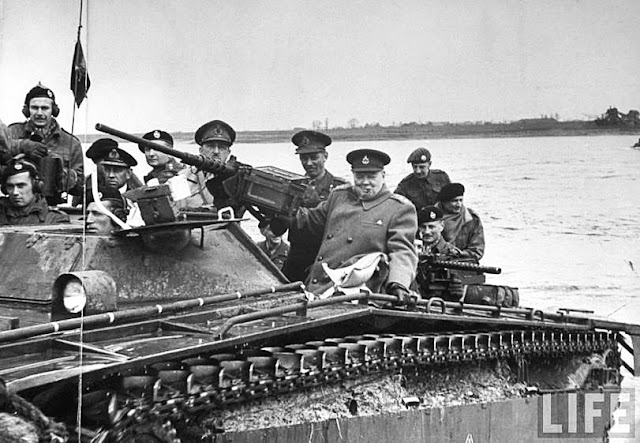