Breeds of Dog and Human

Life is life—whether in a cat, or dog or man. There is no difference there between a cat or a man. The idea of difference is a human conception for man's own advantage. —Sri Aurobindo

How many legs does a dog have if you call his tail a leg? Four. Saying that a tail is a leg doesn't make it a leg. —Abraham Lincoln

It is estimated that there are almost one billion members of the species Canis familiaris, or more lately known as the wolf subspecies Canis lupus familiaris—that is, dogs—in this world, almost all of them living in association with humans. Most of them are mongrels of no particular breed, especially in the west, although there may be more than 400 distinct dog breeds alive today, not including extinct ones. The American Kennel Club officially recognizes 195 of them, with some 70 more working towards official recognition.

Some breeds are artificially and more or less arbitrarily created by humans as companions or ornamental pets; others are artificially bred along less arbitrary lines for some specific function like pulling sleds, herding sheep, retrieving ducks shot in water, chasing down rabbits, ratting, fighting other dogs for sport, and so on. Still other breeds appear to have evolved more or less naturally as the generic dog of a generic human population—the standard Southeast Asian village dog, for example, or some breeds of Eskimo dog.

It is well known to dog breeders, and also to the general population, that these different breeds of dog differ from each other not only physically but mentally. They have different average temperaments and intelligence levels (the latter generally measure by the ease or difficulty of teaching them a task). Some breeds of dog are known to be docile, friendly, and safe with children, like golden retrievers or cocker spaniels, while others are more prone to ferocity. Some tend to be one-owner dogs, like Scottish terriers. Some are nervous and others, like the proverbial coonhound, are more laid-back and lazy. Some are relatively intelligent, like some breeds of sheepdog, and others are notoriously brainless (or at least hard to train), like some terriers and ornamental companion breeds. All this is not particularly controversial, and people usually can talk about psychological or temperamental differences between different breeds of dog without eliciting a storm of hysteria from people insisting that all dogs are equal and have the same talents and potentials as any other domesticated canine.

(Even so, there has been recent protest against breed-specific legislation in a number of countries including the USA, which legislation bans or restricts ownership of stereotypically dangerous breeds of dog such as pit bull terriers, the Dogo Argentino, and the Japanese tosa. The legislation still exists despite protests, however, which of course is a matter of stereotyping and discrimination, to a degree that if something similar were applied to humans it would be viewed as outrageously unacceptable racial profiling.)

Obviously, the average sled dog set to herding sheep, or the average companion dog set to retrieving ducks or flushing partridges, would probably not do as well as the average dog specifically bred for sheep herding or these kinds of hunting. For that matter, even among hunting dogs a retriever would not do as well at pointing pheasants as a pointer, and vice versa for retrieving shot ducks. The circumstances of their evolution and their breeding have had lasting psychological effects, for example by emphasizing certain natural instincts over others, or preserving useful random genetic quirks. So this kind of variety in the species Canis (lupus) familiaris represents a good kind of diversity; different kinds of dog are good at different kinds of function.

People who breed dogs and know more about them than the average human also tend to be of the opinion that a purebred dog is superior, again on average, to a mongrel of mixed breed or of no special ancestry at all. Some of their arguments to this effect include the idea that purebred dogs are more tractable and well-behaved, they look better, they are often more intelligent (more easily trained), and due to human selection pressures they have inherited the capacity to form a much deeper bond with a human master. They are more advanced and “civilized.” Also there is the matter of preserving history, and historic breeds. Plus of course there are the points already covered, that with greater variety there are more dogs particularly adapted to different tasks, including simply being nicely behaved dogs who love their masters. So this would not only be an endorsement of the wide variety of dog types but would go farther to state that just about ANY purebred dog breeds are a good idea, even if the original function for which they were bred is now obsolete, simply because purebred dogs are in some ways superior.

(Playing a little mongrel’s advocate here (advocatus mixtumqui), artificial human attempts at dog eugenics do sometimes produce traits which could be considered natural defects. Purebred Boston terriers and French bulldogs, for example, are often incapable of bearing litters of pups naturally and must be taken to a veterinarian to have them delivered by caesarian section. Also, Great Danes often have heart problems and short lifespans. These sorts of issues tend to be side effects of some trait found desirable by breeders, but a dog, say, which cannot bear live puppies naturally is totally dependent upon human technology for its continuation, and could be called genetically defective. This arguable defect of dog eugenics applies primarily to breeds deliberately generated by breeders, and not nearly so much to breeds of dog that organically arose in association with the people of some locality, like the aforementioned Asian village dog or Eskimo dog.) 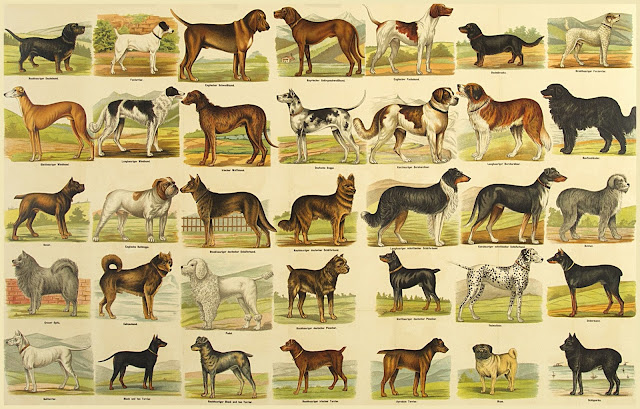 Our own species, Homo sapiens (or our subspecies H. sapiens sapiens), is not so different; in fact humans and dogs have undergone convergent evolution as symbionts for many thousands of years. So the typical Burmese village dog is just as much of a breed or race as is the human Burmese villager, or Burmese person in general. Humans also are diversified into “breeds” or races or ethnicities, more along the lines of the generic regional breeds of dog than the deliberately bred and created ones.

In order for us to resemble the more specifically bred dogs, those bred for some predetermined particular purpose (like maybe hunting badgers), we would have to resort to politically incorrect human eugenics. Even so, there is even within localized human populations a tendency for a kind of natural eugenics to occur: higher class humans, generally possessed of greater intelligence, beauty, and talent, tend to interbreed amongst themselves, producing relatively “superior” offspring. Charles Murray (notorious co-author of The Bell Curve) has written about the “cognitive elite” that are gradually distinguishing themselves socially and genetically above the rest of the modern population, and “breeding” has always been a matter of pride for the upper classes. This makes perfect sense from a Darwinian point of view. But the fact remains that there clearly are distinct breeds of human even now, evolved to fit different climates, lifestyles, and ecological niches.

HOWEVER, if one tries to state the obvious, that is that different breeds of human ALSO differ not only with regard to outward physical traits but also inwardly and psychologically (with regard to, say, instinctive temperament and/or ease at learning new skills, alias “intelligence”), one may be hysterically denounced and attacked for being a RACIST, or a race supremacist, or maybe just an evil Nazi. The plain fact is that ancestral selection, natural or otherwise, has its genetic effects both physically and mentally, and that a population of humans adapted over thousands of years as, say, settled farmers in the temperate zone, will have different inherited qualities from a population evolved from tribal hunter gatherers in the tropics or from nomadic reindeer herders in the arctic. Empirical testing can even verify these differences, and does so, but such verification is now demonized and censored, and scientists who choose to conduct or cite this research are punished and silenced in various ways.

The primary reason for this is of course cultural Marxism (“progressivism,” Social Justice, identity politics, emancipatory politics, postmodern ultraliberalism, whatever), which is largely based on the palpable falsehood that all groups of people are necessarily the same, having the same average intelligence, the same basic temperaments, the same talents and potentials, and the same ability to prosper in a western-style modern technological civilization. Thus a fundamental argument of “progressives” is that ANY inequality of outcome, of different groups’ performance in society, MUST be the result of systemic oppression—unless maybe it is East Asians who prosper, in which case they are resentfully ignored because they obviously do not fit the false narrative of Social Justice. It is like insisting that all breeds of dog must be equally adept at herding livestock or retrieving shot ducks from water or fighting badgers in their burrows, and that any inequality in that sort of outcome must be due to “systemic oppression.”

Obviously, to acknowledge empirical reality is a good thing, and the empirical reality we are facing is that all breeds of human, like all breeds of dog, are not created the same, even though they are all equally human and should have the same consideration as humans, the same rights, the same protections under the law, and the same opportunities as citizens, even if they cannot make the most of those rights and opportunities as well as someone more easily trained or more tractable.

Globalists notoriously favor the denial and dissolution of human races, wanting to turn the entire human species, or at least those living in the west, into a non-race of light-brown mongrels, except maybe for the wealthy elite classes; this sometimes goes by the vulgar designation of the Kalergi Plan. But not only does this eliminate true diversity, with the same kind of mutts herding sheep, retrieving shot ducks from water, flushing partridges, assisting the police, guarding properties, and so on, it also removes the outstanding qualities of each race or breed and insists, as Marxism always does, on mandatory mediocrity and weakness for all but the ruling elite.

In other words, “progressives” are yammering for diversity while vehemently opposing it.

No doubt some who hear such arguments as those discussed above would be inclined to blurt out immediately, impulsively, and with some heat, “We are not dogs!” To such people I would award the prize for the most obvious, knee-jerk, and predictable statement possible. Of course we are not dogs, nor are we chickens, and the dogs and chickens are not us. But that is irrelevant. Also I would point out that, genetically, humans and dogs are approximately 90% identical—even setting aside convergent evolution, we are much more alike than different; and a dog is closer to a human, both physically and mentally, than it is to a chicken. The observations on breeds, and on their value, and on the worth of their preservation, remain valid. 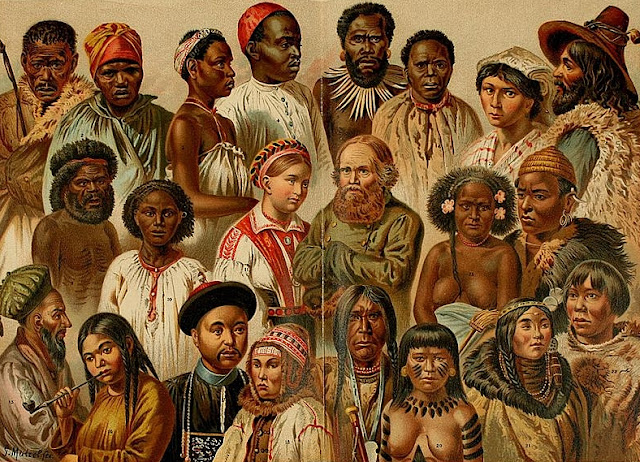