A Weird Spiritual Dilemma (Weird to Me Anyway)

"You yourself impose limitations on your true nature of infinite being and then weep that you are but a finite creature. Then you take up this or that spiritual practice to transcend the non-existent limitations. But if your spiritual practice itself assumes the existence of the limitations, how can it help you to transcend them? Hence I say know that you are really the infinite pure being, the Self. You are always that Self and nothing but that Self." —Ramana Maharshi

This post deals with an issue that I have been brooding over recently, and which has bothered me occasionally in the past also. It is based on my understanding of reality, which I suppose I should explain, at least a little bit.

I’ve written about my not-entirely-Buddhist Theory of Everything in a few old essays on my first blog, here and here. But for those of you who do not desire the inconvenience of clicking on other essays and reading them before you read this one, I will attempt a shortish synopsis of what it is about. It all started when I was standing in a Burmese forest washing my bowl by a pond, and the thought arose unbidden in my mind: “The entire Universe is contained within a single point which has no dimensions.” The thought intrigued me, and so I tried to work out the implications out of curiosity. One of my first attempts to visualize such a Universe was imagining a sheet of paper totally covered with black ink: It contains every page of every work of literature within that ink, all on a single page. But the flatness and blackness made the simile seem less than satisfying, so I changed the image to an uncarved block of marble.

So let’s say there’s a block of marble of purely arbitrary size. There is nothing else nearby to compare it with, so it is effectively sizeless. Now within that block of stone is literally every statue ever created. Michelangelo’s David, Laocoon and his sons being devoured by snakes, every Aphrodite, every bust of a Caesar…everything. An infinite number of statues that have never been made before are also in there, just waiting to be liberated from the surrounding stone. Every molecule in each statue is already there, in exactly the correct position, with only the extraneous rock having to be cleared away, at least in one’s imagination. That uncarved block of stone, containing in virtual or potential form every possible statue—and they’re all really in there, just waiting to be distinguished—corresponds to Ultimate Reality: formless, sizeless, containing all possibilities within it. Mystics who have glimpsed this uncarved block have called it Tao (and the Tao Te Ching really does refer to Tao as “the nameless uncarved block”), Brahman, the Dharmakaya, the One Mind, God, Plotinus’s the One, Hegel’s pure Being, Eckhart Tolle’s Being, etc. etc., and mystically inclined Theravada Buddhists might call it Nibbana-dhatu or some such…although of course the Theravada Buddhists tend not to reify the Absolute and if they refer to it at all as an It, it is often referred to negatively as Voidness. But it is from this Voidness, or whatever you want to call “it,” that the entire universe of phenomenal forms arises.

What happens is that some of these virtual statues contained in the formless block (which itself transcends both existence and nonexistence, both and neither) are so complex that they become self-referential and self-aware…and seize upon the idea that they exist as distinct and real individuals. All of us are like this, forming not only individual self-aware moving statues, so to speak, but also members of group sculptures, all at the same time, though time itself is just another imaginary dimension through the block.

So that, in a nutshell, describes, more or less, my answer to Stephen Hawking’s question of why the phenomenal universe “bothers to exist.” The primordial delusion of “I am” possessed by a complex, self-referential virtual subsection of formless infinity, is the fall away from infinite perfection (assuming that it can be even said to exist, having no opposite) of Ultimate Reality, and the whole root of Samsara. If you would like a longer, more patient explanation of the case, I refer you to the two old blog posts cited above. But that is where the force of logic, exercised on an arbitrary thought that I found intriguing, has led me. All conscious experiences are like an infinitude of Leibnizian monads, all superimposed one atop the other. Anything not self-conscious would remain merged in the uncarved block, unless conjured up or singled out by one of the (deluded) self-referential possibilities.

Practically from the beginning I was aware of some unsettling implications of this particular theory. For example, since the formless Absolute (which neither exists nor doesn’t exist, nor both nor neither) contains within it all possibilities, every conceivable version of me is in there, and I suppose in its own way is just as “real” as “I” am. Furthermore, it has to be that way, no matter what “I” do or don’t do. So even if I become a fully enlightened saint in this life, there will still be an infinite number of versions of me dying of AIDS in a ditch, being stabbed or tortured to death, being addicted to heroin or self-mutilation, marrying the wrong girl at the age of nineteen, joining the Navy and becoming a nuclear technician, being eaten by zombies, becoming one myself, and so on ad infinitum. My own enlightenment would not diminish the suffering of the universe at all, largely because infinity minus one still equals infinity—and the one that is subtracted is only virtual anyway. These are unsettling thoughts, and they lead to another unsettling thought: It doesn’t matter what I do or don’t do in the grand scheme of things, because nothing really changes. Nothing really CAN change. Nothing that changes is real. Furthermore there will ALWAYS be an infinite number of (virtual) unenlightened suffering beings—hell, there will always be an infinite number of unenlightened suffering versions of me. Which leads to a dilemma: What’s the point?

Fortunately I am not the first person to confront this problem, or virtual problem. In fact many spiritually advanced beings have acknowledged this situation in one way or another; and, maybe fortunately for everyone, they still advocated a life of morality and wisdom.

First of all, this world—all worlds really—may be considered to be generated by delusion anyhow. Furthermore the Buddhists teach that there is no self. So there is no real suffering from which to escape, and nobody to escape it. Enlightenment isn’t so much the escape from some samsaric phenomenal universe but rather the realization that the whole notion of samsara, and escape from it, is delusional. Nobody escapes from anything by being enlightened, even according to the testimonies of some of the beings who allegedly have escaped. So just realizing this seeming dilemma is a step towards liberation, or rather a step towards no longer identifying with anyone who needs liberation.

Even within the delusional context of Samsara, no path really leads to liberation or enlightenment—or rather no path ends there. One must leave all paths in order for the highest goal to be attained, because the goal is at a different level of reality from paths anyhow, just as the uncarved block of marble is at a different level (essence, substance) from the infinitude of virtual statues (form) contained within it. Enlightenment or liberation is itself a kind of paradoxical paranormal event which arises through the cracks in our self-imposed prison of rules and limitations. Cookbook methods really can’t touch it…though the cookbook methods may be helpful in generating these cracks. But still, the block must contain every possible statue, no matter how horrible, and nothing real really changes. One simply stops identifying with one of an infinite number of imaginary scenarios, but that scenario remains, and they all remain, in the same virtual form that we are in now. No virtual statue can be removed from the block.

So why bother to strive for virtue and wisdom? It’s all illusory and a madman’s errand anyway, right? Well, there is still one reason that seems adequate to justify the holy life, or any life that favors virtue and wisdom: It at least causes us to seem to suffer less at the local level. We may not really exist, and the beings around us may not either, but we still seem to exist, and to suffer, and so at least there is less misery at hand by cultivating virtue and wisdom, both for us and the beings who come in contact with us. Or seem to, because it’s all the Matrix anyway, all shadows flickering on the walls of Plato’s cave. 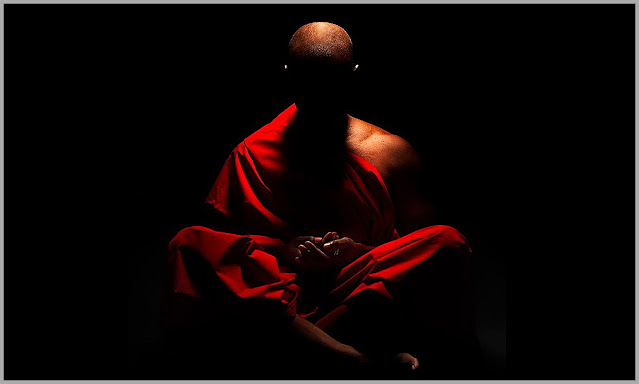